‘Twins and quadruplets! How my family has ballooned with multiple births’ 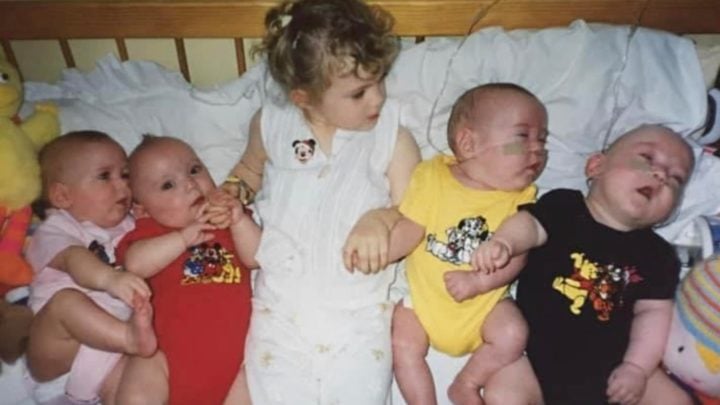 I had three single births, but like many women I always thought twins would be lovely. A friend of the family had given birth to twin daughters in the 1960s in the days before ultrasound imaging was around, she didn’t know of the impending double surprise until they were born. I also remember hearing years later that my maternal grandmother had been a twin, her sister had died in infancy.

Fast forward to when my eldest daughter had her first child, a daughter, the light of our lives being the first grandchild, we always were so pleased we lived close by. A year or so later my daughter and her husband decided to try for another baby. After a positive pregnancy reading, she got big very quickly and we all laughed and said it looks like more than one!

Quadruplets! Naturally conceived. I can still remember the shock we all got, just unimaginable and unthinkable how a working class family could support an instant large family.

My daughter thrived during the pregnancy although months before an electrical fire destroyed their kitchen and they had to live away from the home with family while it was being repaired. She didn’t get a lot of rest having to deal with that and a toddler in the mix.

In early-June 1998, my daughter went into early labour and the quads were born at 26 weeks. Early labour is not unexpected with higher multiples, but it was still way too early. One tiny little girl and three tiny boys came into our lives. They all weighed about 2 kilograms.

After months of challenges, all but one of the babies were home by Christmas of that year. Two of the boys had cerebral palsy and weak lungs. Sadly one died at 11 months old while the other made it to six years and was severely disabled. My daughter and her husband needed a lot of support in those early years.

The remaining girl and boy are now almost 22 and have both thrived into adulthood.

My daughter was told that her daughters were six times more likely to have multiple births. We did all gulp upon hearing this news, but were not surprised.

During all this, my daughter-in-law and son were having a hard time conceiving. With a bit of assistance, they eventually had a baby boy and two years later boy/girl twins. They have all grown up healthy and are a credit to their parents. We are so proud of them.

My eldest granddaughter met her future husband five years ago. They married in late-2019, had their honeymoon in the United States at Christmas and found out she was pregnant in January, she is 23.

They were both saving for a house and luckily managed to buy one in April, because by this time they found out that twin boys were on their way! Everyone I tell just laughs, as though it is totally expected with the family history.

We are becoming first time great-grandparents and couldn’t be more pleased. Our other son had a little boy two years ago so we get practice grandparenting all over again.

I think as the years go by, the family will go ahead in leaps and bounds, the women will accept their multiple status and be surprised if they only conceive a single child!

Do you have multiple births in your family?