Sassy at seventy: Battling the bank 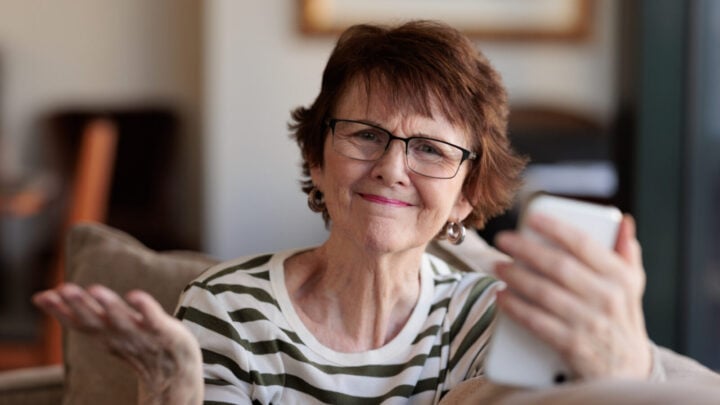 What started off as a good day for Sandy, ended in a long winded battle with the bank. Source: Getty

Elvis Presley started singing in my head. “Did ya ever get one of them days,” he crooned, “when nothing is right, from morning till night…”

He should have started singing earlier so I could have been prepared for what was to come. But, no, I happily drove into town, parked in the centre parking, looked to my left to make sure no cars were coming before crossing to the footpath – and was nearly run down by a man on an electric scooter riding the wrong way down the middle of the road. As Maxwell Smart would have said, he missed me by that much.

Undaunted, I walked to the chemist, made my purchases, went to the checkout to pay, and had my credit card payment ‘declined’! My husband’s card also ‘declined’.

Now, before you start thinking I’d been on a frivolous spending spree and reached my credit limit, I’ll give you the background to this long-playing saga.

Five weeks before this, I’d decided that, as it was two years since my husband died, it was time I let the bank know and get a credit card in my name, rather than be the secondary card holder which I’d been for forty years. So I phoned the bank. I’m sure you’re all familiar with the scenario – you press the only button you think might get you through to a human rather than the robotic voice telling you all the options you don’t want, and then you wait while tinny music is interrupted every minute by the robot saying how important your call is.

So I waited. And waited. Twenty-eight minutes later I got to speak with a man who said he’d put me through to the Deceased Estate section (shame that wasn’t listed in the ‘press button for…’ options.) So again I waited. And endured music I’m sure was played by that kid who used to scratch his fingernails down the school blackboard. I’ll bet he would have been upset at having his masterpiece interrupted by the robot voice reiterating how important my call was.

At forty-eight minutes I figured I’d soon go deaf or insane, so I hung up. Fast forward to the next week when I went into the only remaining branch of my bank left in town. A town, which, by the way, is now officially a city and has a population of approximately 100,000. I lined up with all the other customers trying to reach the only teller, but when I got there, she said I had to make an appointment as no staff were available to talk with me. I looked at all the empty Perspex-enclosed cubicles and decided that Covid and the flu must be very discriminatory and only targeted bank staff, and made an appointment for the following week.

At that appointment, I met a nice young man called Jim who was so softly spoken that I had to bypass the Perspex barrier and almost sit on his lap to hear him. After I’d explained my mission, he said he would have to speak with the Deceased Estate section, and proceeded to phone them. We waited. And waited.

“Don’t you have a direct phone line to that section,” I finally asked. “No,” he whispered and smiled apologetically. “You mean,” I said, after retrieving my jaw from his desk, “you don’t have a direct line to a section that’s part of YOUR bank?” This time his apologetic smile seemed a little sickly. He put his phone on loudspeaker so we could share the assault to our eardrums and our music sensibilities and trotted off to the printer in the far bowels of the building for a statement of assets, income and expenses for me to complete.

By this time I was in danger of paying the Council a parking fine, so I arranged another appointment time, gathered my paperwork, and left him succumbing to early-onset deafness or tinny-music-induced dementia.

Four days later, I arrived early for my second appointment, but Jim was ten minutes late. A lady sitting opposite me growled that she’d been waiting 45 minutes before going to find whoever was supposed to be seeing her. Jim finally arrived, all apologetic because he’d mistakenly thought my appointment was the following day and, no, he still hadn’t heard back from the Deceased Estate section. I gave him my completed paperwork and asked him to let me know when he had something to report.

During the next five days, I heard nothing from them, and then I went to pay at that chemist and learned the cards had been frozen. Afterwards, I phoned the bank (by this time I’d been given the local number), and left a message on their answering machine to the effect that I would have appreciated a phone call or text to let me know this was going to occur. Apparently, forty years of always making payments on time and paying in full every month didn’t warrant any such courtesy.

Fed up with this appalling lack of service I went to another bank, one that had originated in the town and is very popular, probably because it has three branches, at least two tellers in each, and you could talk to the manager.

When discussing my chances of getting a credit card with them, the manager told me that I’d have to have enough money in my account to cover a credit card limit several times over. My superannuation didn’t even come into the equation (well, we all know Wall Street can bring the world down with a resounding crash almost overnight, don’t we). I said that surely my pension was classified as a reliable, regular income, to which she replied that no, the government could do away with the pension at any time. “Only if they don’t want to get re-elected,” I said. But she merely shrugged.

I changed tactics. “So it’s okay for banks to give credit cards to eighteen-year-olds working part-time at Maccas, but a pensioner on a regular income doesn’t qualify?” Silence. The kind of silence that said banks gleefully hand out plastic to young people so they’ve got them hooked into debt for life.

But being a sweet, helpful young woman, she proceeded to work with me to wrangle some figures and I will soon be granted my own piece of plastic.

A few days after this I received a letter from the Deceased Estate section of my former bank informing me that the credit cards had been stopped and giving instructions on the best way to cut them up.