‘Our greyhound can run 60km/h, but prefers to take an Uber’ 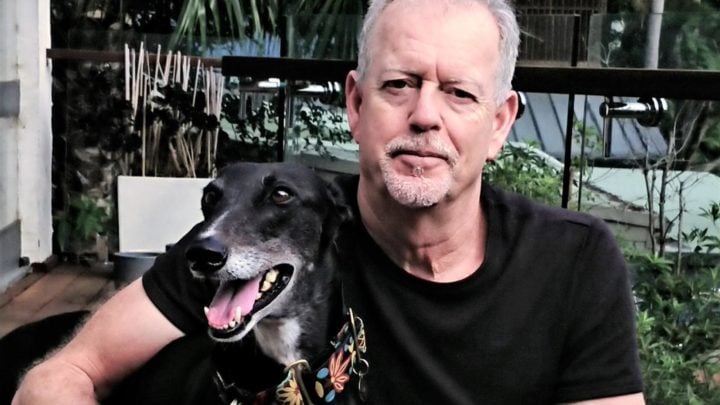 Five years after our last cat died, I persuaded my wife that we should adopt a rescue. She said she didn’t want a dog, so we got a rescue greyhound. Same species, but rather different, as we soon learned.

Our greyhound, LB (pronounced ‘Elbe’), can run faster than any other dog in the park, but she would rather lie on the sofa and have a cuddle. Everyone we meet wants to pat and stroke our greyhound and tell us how beautiful, graceful and sweet she is. We nod in complete agreement.

They also assume we are wonderful humans because we have adopted a rescue greyhound. We nod in complete agreement.

Our Greyhound presses her body against our legs in a curved shape for comfort and security; nothing melts our heart faster or makes us feel calmer. Work stress disappears, blood pressure 120 over 80. The other greyhounds we’ve met seem to behave the same and their humans have almost identical experiences to ours.

Also, LB does yoga with me.

She also twerks when she digs.

The day I brought our greyhound home from the Greyhound Rescue kennels was interesting. The drive home was uneventful. Getting her out the car wasn’t — I couldn’t coax or bribe her. Eventually I called Greyhound Rescue HQ and they told me to carry her. Which I did. She’s a tall dog, but greyhounds are slim, so she weighs little.

Half an hour later she was stretched out on our day bed, which is how she got her name: LB. It stands for Long Black. She regularly rearranges the cushions on that bed to suit her mood.

First problem: stairs. Most Greyhounds haven’t had to deal with them before. We have 26 from the road to our house, 10 from our house to the back garden and another dozen inside the house. A couple of days later, she had all of them mastered. Problem solved.

Second problem: she was timid, and we were worried. Living in a house was very new to her and we were due to have a family function with about 25 people over for lunch. We didn’t know if she’d cope and our back-up plan was to put her in a quiet part of the house, with family members taking turns to sit with her. No need. She wagged her tail, walked around introduced herself to everyone. She was unbelievably gentle with the two children among the guests: a curious toddler who prodded where he shouldn’t and his four-year-old sister. Now she wants a greyhound too.

Third problem: LB’s related to Houdini. We decided LB should come to a family wedding. I tied her to the deck railing, took the luggage inside and returned — no LB. I spotted her after about 5 minutes of panic and called her. She came back, but bolted down a nearby dirt track. After she stopped laughing at my attempts to chase her, she waited for me, wagged her tail, let me attach the lead to her collar and we walked back. The lesson here is that greyhounds’ heads are smaller than their necks. You need a Martingale collar or harness.

Fourth problem: clothes. Greyhounds are slim and have short hair and thin skins. They need a coat to keep warm when you go out on winter days. A raincoat to keep dry and a few lighter ones to wear around the house on chilly days. Search online and you’ll see photos of them looking so cute that it’s hard to keep your finger off the ‘add to cart’ button.

LB has won over my wife, who is now besotted with her. Our lovely greyhound is calm and friendly with people and other dogs — in fact I don’t think she would harm a moth. We’ve been on amazing organised walks with other greyhound owners in our local area. We’ve also discovered neighbours who we hadn’t met or spoken with before. They and their dogs have become new friends.

But there’s one thing that seriously annoys me about owning a greyhound. We still have an outdated muzzling law in New South Wales that requires these sweet-natured dogs to wear a muzzle until they pass a Greenhound test — a program run by the NSW racing industry. Victoria and the ACT have ditched muzzling. The NSW Government decided to remove it in March 2017. The Office of Local Government is supposedly working on it. Meanwhile these gorgeous dogs, many of whom suffered cruelty at the hands of the racing industry, must now put up with the discomfort of wearing a muzzle and the stigma of being made to look like they are dangerous, when all they want is to feel safe and loved.

And have a cuddle.

Greyhound Rescue has declared April is ‘Adopt a Greyhound Month’. Greyhounds make great pets and with more dogs than ever needing homes, April is the perfect time to consider adopting your next best friend. Greyhound Rescue has more than 50 greyhounds available across the Sydney-Canberra-Illawarra region, but those elsewhere can find one at Every Greyhound.