‘Our Glad: There are more critical issues than who the premier knocks boots with’ 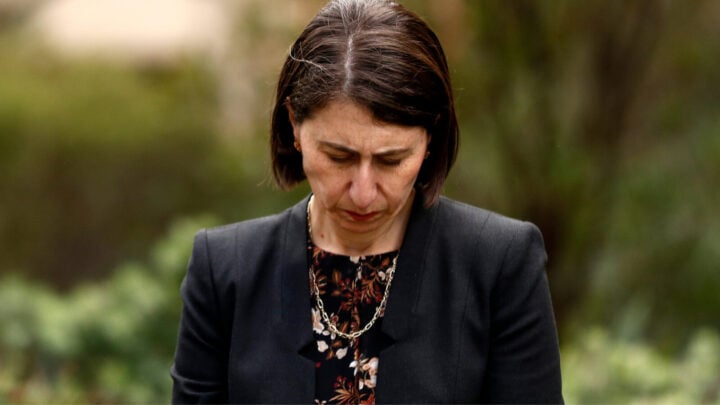 It's been a difficult week for NSW Premier Gladys Berejiklian. Source: Getty.

Once upon a time, when someone spoke dreamily of ‘Our Glad’, it was understood they meant singer Gladys Moncrieff, the Bundaberg woman who selflessly entertained our troops in the foetid jungles of New Guinea, while still carrying the after-effects of a serious road injury. Eighty years later, however, Our Glad means Gladys Berejiklian.

Now, I don’t intend to compare Gladys Berejiklian with Gladys Moncrieff because not only do entertaining and politicking seem worlds apart (although a closer examination might suggest otherwise), the moral context of the world in 1943 was, in retrospect, so much clearer than the one we inhabit in 2020.

Indeed, if pushed, I would have to say that the only public figures who endure warmly in my imagination are all titans of the 1940s when the issues and the responses were so much more sharply etched than today. To me, in comparison with FDR, Winston, Harry S for Nothing, Clem and Ben, today’s crop of political leaders seem … so damn tacky.

I wouldn’t suggest for a moment that despite her admitted lack of judgment, Gladys B. should be called tacky. Although I’m not quite so sure about her “close personal friend” Daryl Maguire. While she would never be ‘My Glad’, nevertheless you have to respect her “safe pair of hands”, more than anything, in managing difficult and complex portfolios.

Yet, when I last visited Sydney, in July 2019, I had to admit to profound shock when I saw what the developer’s swinging ball was doing to a city that always been part of my being. And, for the life of me, I couldn’t see what was the gain in all this bedlam except, perhaps, in a pile of tinkling coins in someone’s pocket.

I think that visit was the first time that I gave Our Glad (21st century version) more than a passing thought, leaving me wondering whether there might be more to this premier than her unruffled personality. A steely-honed weapon, perhaps, for ‘Gladys’, of course, owes its linguistic provenance to ‘gladius’, the Latin word for sword.

So, it was with some amazement when, wandering through our living room innocently, minding my own business, I happened to notice Our Glad on the box in the dock being quizzed by a honey-tongued assassin, otherwise known as the counsel assisting. And what transpired was even more startling, for there was this slight woman for whom, my mother would have said acerbically, “butter wouldn’t melt in her mouth”, admitting not only to peccadillos, but secret peccadillos, and with a member of her own team, the very ones who always claim the moral high ground. Remarkable.

Nevertheless, I hardly paused a moment because I don’t give a damn who the premier of my state has a “close personal relationship” with. Surely there are other far more critical issues that deserve as least as much attention but get none. Like how do they expect old folks and young kids to survive on parsimonious handouts after, in one case, a lifetime of doggedly doing the right thing and, on the other, the destruction of any chance to lead the fulfilling life that we all once accepted as our Aussie birthright.

Perhaps it was all the salacious innuendo, but Our Glad’s travails lasted for days, far longer than the 36-hour turnaround that is the best attention span anyone can hope for in this shallow, celebrity-driven age. And so I began to take a keener interest, I’m glad (note cunning use of pun) to say.

Patient at first, as she has always appeared to be, Our Glad parried the questions calmly in her trademark tone of mild righteousness, saying that (a) she had not done anything wrong and that (b) she only wanted to get back to work serving the people of New South Wales. Amen, I wanted to say.

But I couldn’t get out of my mind the audio tapes of Our Glad shushing old Dazzer whenever he tried to whisper anything about his business dealings, explaining to the counsel assisting that she “assumed” he was reporting them on his pecuniary interests register. Did anyone ask her whether she actually checked that he had? Or reminded him that it was his duty to do so? That is, if the kind of business dealings he was actually engaged in were the kinds of things you would want to declare on a pecuniary interests register.

I wish I had been back in the media scrum because there were some over-riding questions I wanted to ask: “Miss Berejiklian, you say you wish to get on with the job of serving the people of New South Wales yet, while casting nasturtiums at Dazzer’s ambitious business dealings in their generality, when the specifics of any particular deal arose between the two of you, both you and Dazzer entered the old cone of silence. Why?”

And my follow-up question would have been: “Miss Berejiklian, isn’t protecting the transparent integrity of government and the integrity of the public purse fundamental to getting on with the job of government? After all, you had a lot to say, and rightly, about Ian Macdonald and Eddie Obeid. And their’s were the sins of Commission. Do we no longer have sins of Omission?” But, alas, my questions will not be answered.

Instead, the media, by and large, did what it does best and gave us a binge of sob-story/keyhole peeping revelations which reached their crescendo (or should that be diminuendo) in one news outlet assuring us that Our Glad had returned to the virtual nunnery of public life as almost a sacred nuptial between her and her people. God help us!

I mentioned earlier that if I have any ‘heroes’ in public life, they are the titans of World War 2 and post-war reconstruction when we westernised humans showed we could set aside our personal spites and pull together in the common good. But there is one other.

John Profumo behaved like a grubby little man when he lied to the House of Commons about the “close personal relationship” he had with young-lady-about-town Christine Keeler. Caught out, he didn’t indulge the modern Trumpish counter attack of “fake news” or even the Trump-lite response of tricky deflective words conjured up by the clever boys in the marketing department. He took it on the chin.

Profumo resigned and spent the rest of his life doing unremarkable charity work in the East End of London. And when I read his son David’s memoir of his family, there was no posturing, no sanctimonious boasting, no wrist-slashing, no smug deflections, no brazen lying. A man betrayed his office of trust and there was only one act of penance possible. To go, go quietly and go for good.

Have you been following the recent headlines involving Gladys Berejiklian and Daryl Maguire?