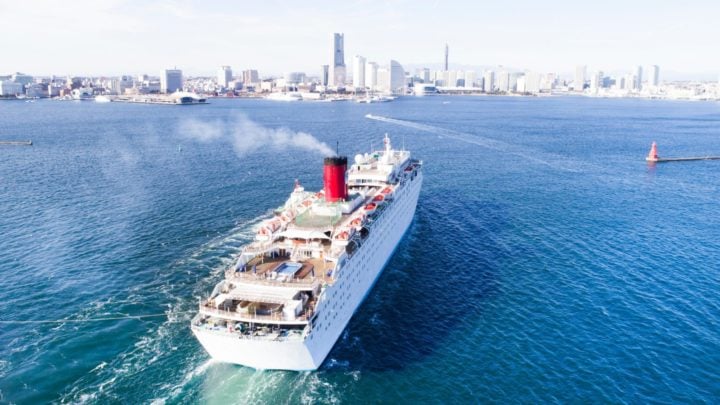 Brian's noticed a few changes to the way travellers cruise today, and he's not sure he likes it. Source: Stock Photo/Getty Images

One of today’s most popular sports or pastimes, is the one called ‘cruising’. Numerous very large ships circle the globe incessantly these days, built specifically for this wonderful way of spending a few days or even weeks, away from the drudgery of washing up, vacuum cleaning and bed making, or working at the factory, shop/office — and having a bloody good time instead!

Of course, ‘having a good time’ can have very different meanings, depending on your age, your health and your frame of mind, and various ships are specifically designed to fulfil the needs of everyone, which is good! For the young there are ships full of bars, discos, cafes, and casinos stocked mainly with ‘pokies’, while most cabins boast double beds and no windows. The on-board staff are fully equipped and trained to deal with fights, drunkenness and drug taking.

For the more mature business man and his family (or mistress), things are somewhat more subtle, with elegant décor throughout the vessel, lounges rather than bars and casinos presenting roulette wheels and other such expensive ways of losing your money. Cabins, all well-furnished offer a variety of appointments, twin beds, dressing tables and real wardrobes, just like any well-presented hotel room. The rooms usually provide private balconies for viewing the passing scenery, entered through large French windows.

Retirees aren’t completely forgotten either — they tend to be provided with, on the ships specialising in that level of accomodation, quiet little drinking nooks, very much like typical English pubs, small restaurants preparing small but beautifully cooled meals, very large sitting rooms containing shelves around the walls packed with books and magazines, double cabins almost invariably furnished with twin beds, thick carpets and comfortable arm chairs. There are nice windows, providing good views of whatever is to be seen out there, but balconies tend to only be available to those with the extra cash to pay for it.

However, the thing I feel is missing in virtually all these modern monsters of luxury transport, is the sea! When Jacqui and I used to travel on ships, in the 1950s, they were ships, unlike their modern counterparts, which are little more than quality hotels, mounted on very large barges, with engines fitted. The sea now is if anything, a slight irritation, I feel, with everything on board aimed inwards towards the fantastic and sometimes garish décor, the shops, bars and restaurants and of course the casino, with little or no thought for the wonderfully clean air outside, or the gorgeous views when land is in sight, or the rows of deckchairs that used to be arranged along the decks in the old ships where one could sit and dream, or admire the view.

As I said, those vessels we travelled round the world on were ships. We lived in proper cabins, not floating hotel rooms. We had a round porthole to peer through and the furniture was fairly minimal but efficient, so that if the sea was rough it didn’t slide about all over the place, injuring us, and the beds were twin (though in some of the lower class cabins, bunks were provided instead). There were two large dining rooms, serving superb food, (pretty well every meal comprised of seven courses, even breakfast). Bars sold drinks at ridiculously low prices, there was a cinema two nights a week offering up to date films, and if the weather was good dancing on the expansive rear open deck.

The greatest difference to the modern ships was the fact the three upper decks including the main were all open all the way round, so that passengers could go for brisk early morning walks on them, knowing exactly how far they had gone, because each deck bore a plaque telling you the distance of a circuit! Entertainment was arranged mainly by the passengers themselves, using equipment provided by the ship; and of course casinos hadn‘t yet been invented as actual sea-going equipment at that time, so drinking to moderation was quite popular in the evenings, often accompanied by sing-alongs. (Great fun!)

Sure, it lacked the polish and chic of today’s voyages, but at least we really knew we were at sea in those days. It was always there, looking at us wherever we were on board, and we could hear it too, above the creaking of the ship — wonderful for helping us get off to sleep at night.

For that reason, I just don’t think I would enjoy an ocean voyage so much now as we did then, but of course that may just be because we were young then and I’m now getting too old and decrepit!

Do you enjoy ocean cruising? What is it about cruising that stands out for you?