‘Loving separately: I discovered the secret to a happy relationship was living apart’ 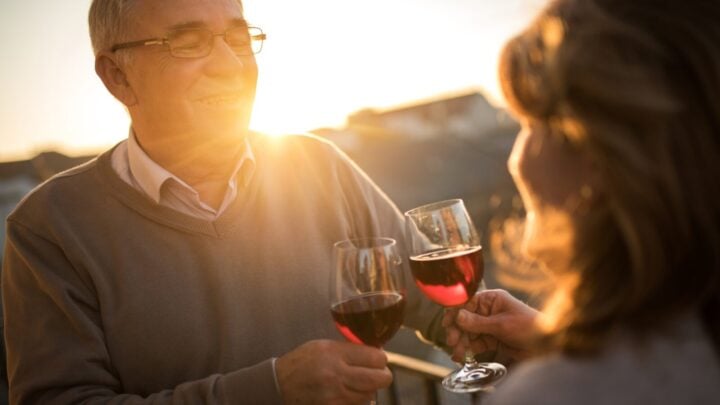 Susan and her partner Pierrot would meet at sunset for drinks before parting ways at night. Source: Stock Photo/Getty Images

After a third try I realised that marriage wasn’t for me. I’m too independent-minded to be a submissive wife or one that makes compromises.

My first marriage didn’t last long — about 18 months — because we were incompatible. My husband was an American and I was British, neither of us got on in each other’s countries. My second marriage lasted 18 years using the compromise system, though I drew the line at him having a mistress. It was her or me? No prizes for guessing he went with the younger model. The third husband was on the rebound and, I later discovered, a bit of a control freak, so I escaped by putting the English Channel between us and moved to France where I set up in business running a small hotel.

Even though I was the boss, I found my male employees thought they knew better. I gave up on male assistants and I found women helpers. They were much easier to get along with and if they made useful suggestions, I went along with their ideas.

This didn’t stop me having to put up with misogynist-minded male customers telling me how to run my business, nor men making romantic overtures hoping to get their feet under my bar counter, made worse once my divorce came through.

When Pierrot arrived on the scene and we became ‘an item’, he made it clear marriage was out of the question. He was a widower and his wife had paid into a private pension fund for the two of them. If he remarried, it would be cancelled. Even though he had two restaurants, he never told me how to run my business, in fact, he sought my advice in the decoration of his establishments!

When the day came for us to retire and we combined our capital to set up a self-catering holiday home, he left me to design the building on a ruined barn site and to draw up the plans. I did this in consultation with him, just as I had with clients in my work as an interior designer and fitted kitchen planner. He helped me navigate all the applications for building consent and when it came to dealing with the contract builder in the construction of the house, I left all the talking to him.

Once the house was built, Pierrot took over, putting in the interior walls and plaster-boarding them along with the ceilings — and when it came to the bathroom layouts, he suggested to me that the main bathroom’s toilet could be in a separate room with its own tiny wash basin, it took a bit of trimming down of the size of that bathroom and the second bathroom that was ‘en suite’ to a bedroom, but Pierrot’s on-the-spot (rather than my on-the-drawing-board) design worked out very well. Our compromise pleased both of us.

There were two cottages on the property but one was in a dilapidated condition, so we lived together in one house and in cohabitating, well there things were different. Right from the start Pierrot did not consult me over the cooking arrangement, he simply presumed … Not that I should do the cooking, but that he should! He worked out how much it would cost per day to feed me and told me how much I needed to pay towards the groceries and … He also did the shopping!

Besides all that he did the building work and dug a garden! But once my plan-drawing contribution was over, he didn’t expect me to do anything else. I even had to insist he allow me to put together the dog’s and cats’ meals!

Now, don’t get me wrong, my dream since a teenager was to be a full-time writer and to have a husband who was happy for me to be one. Besides, the idea was for us to give art therapy lessons to the holiday makers and I was to teach art, Pierrot pottery. He was qualified as a social worker. Before establishing his restaurants he had run a social centre where he set up classes in pottery and silk-screen printing — the latter my craft at art college!

Meanwhile, I was compiling a booklet on what food to eat to stay healthy based on my years of dedicated fact-finding. My only physical activity was taking the dogs for a walk in the afternoons. I was putting on weight because of all the rich French cooking and through lack of exercise. Poor Pierrot, how upset he got when I asked that he didn’t cook a meat dish using cream (as much as I liked eating it). Later, I asked for raw food salad starters, then that he use olive oil in the vinaigrette even though his salad dressing mix was so much tastier. He took offence thinking I was criticising his cooking.

We began quarrelling over money. Pierrot was buying building materials and tools without consulting me (we’d opened an account at a builder’s supplier) and as my financial contribution was greater (it had been agreed he’d be paying most of his share through the work he did) I worried the capital wouldn’t last out the project. Pierrot thought I was suggesting he wasn’t pulling his weight and that I was doubting his integrity.

Our disagreements over financial expenditure was the downfall of our cohabitation and at my request, Pierrot made an end room in the holiday house a bedsit for me. This was a temporary measure until the second cottage was restored for me to move into. Pierrot attended to that and once it was habitable, but not perfected (I ran out of money) he moved into it and I moved back into the first cottage.

We never did set up the art therapy classes, regular holiday makers were easier to attract as clients. As to us, well, we got along fine once we lived in separate houses. Pierrot’s kitchen door was a few steps away from my kitchen door and we met up each evening for sundown drinks together before returning to our own kitchens to cook our own style of cuisine!

Is living apart together something you'd consider to save a relationship?