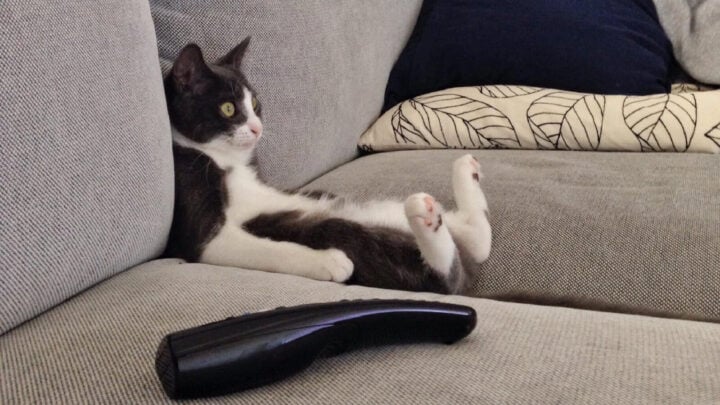 A candid photo of a cat making herself comfortable - and don't even think about changing the channel. Source: Starts at 60

Anyone who believes cats are not devious little furry buggers has obviously not had a cat wake them at sunrise or deliberately sneeze on their dinner portion of KFC chicken.

Our cat, who in human years would be eligible for a cats’ rest home, instead refuses to go into feline aged care and insists on occupying our home where her routine involves sleeping all day and racing about the house like a maniac at 2am. We can follow her progress by the sound of ornaments and delicate items being smashed to the floor as she crashes about in the night.

It’s times like these I marvel at the ancient Egyptians. They were the first people to construct tourist attractions – the Sphinx and the pyramids – with a long-term plan to draw foreign visitors to an area my dad described as ‘miles and miles of bugger all’.

Dad spent some years in North Africa during the great unpleasantness of 1939-45 and he said the only place worth seeing was Cairo because the locals had the sense to build a pub or two. He also liked Cairo because he was there and the German Afrika Korps was not.

I learnt Egyptian history from dad, and he explained how the ancients liked to assemble rocks in triangular shapes. They also stuck big statues all over the place, usually on top of dead kings so archaeologists a thousand years later would know where to dig.

There were so many Egyptian kings they had to number them because Rameses II had to argue with the insurance company that he was still alive and should not be confused with Rameses I on whom the insurance people had paid out.

Dad also told me something I never forgot – the ancient Egyptians worshipped cats. Not just had them round the house as furry ornaments but actually worshipped them as in up on a pedestal, oh great and mighty moggy. Unfortunately, cats have a long memory and they still demand such fawning from their human staff.

Thousands of years later cats seem to have a tiny gene in their brain that tells them that even if they are not worshipped, they should be.

Our home is currently playing host to one of these redundant temple idols. She is a Siamese cat and can be described as feisty which is a politically correct description of a fur-covered nutter.

In the years she has lived with us, our cat has confirmed in my mind that cats were placed on this planet to be a right pain in the sphinxter, as the ancient Egyptians might say.

I blame the Covid pandemic for this attitude of feline self-entitlement.

Time was cats knew that at some point the humans would leave the house for the day and they would be in charge. Then something happened which made the humans work from home, which meant we are disrupting the cat’s well-practised routine.

In her world, humans feed her then should leave the house. She goes to bed and sleeps until a few minutes before they return home. She is then waiting on an armchair with a “feed me!” look on her face when the humans open the door.

Not now, the humans are always home which the cat regards as a serious disruption to her routine and some ill-considered behaviour by the humans to stay in the house all day and work from home.

It’s resulted in something of a battle of the wills as to who controls the house.

A recent example illustrates my point. It was dinner time and we had treated ourselves to a tasty meal of takeaway chicken. Unfortunately, the cat is addicted to chicken and regards any chicken brought into the house as hers exclusively.

In the interests of diplomacy, we placed a small portion of the chook in her bowl and proceeded to sort our own meal.

Cat engaged her vacuum cleaner mode and hoovered the chicken in a nanosecond then leapt onto the armchair where my wife was contemplating a delicious portion of fried chicken.

The cat then approached the plate then promptly sneezed on the chicken. Cue a howl of outrage from my wife and a cackle from the cat.

I wonder if this ever happened to the ancient Egyptians.