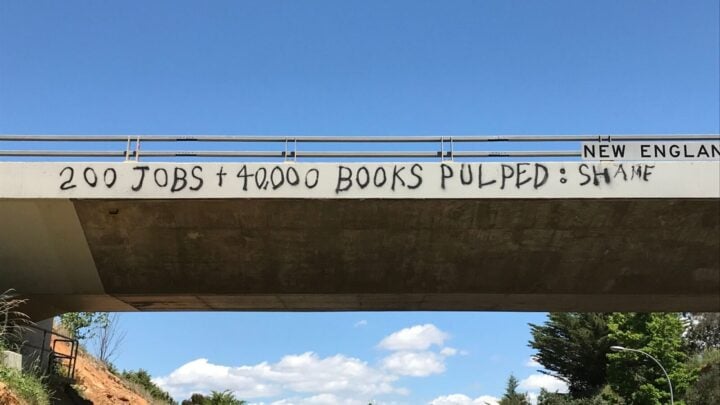 The graffiti protest on Madgwick Drive that started it all. Source: Rod Wise/The Armidale Times

It started as so many significant events often do, in a humdrum way. We were tootling along Madgwick Drive, Armidale, enjoying the balmy weather of early summer when a shaft of dawn sunlight picked up the New England Highway overpass looming up ahead. And scrawled along its concrete skin was graffiti!

Graffiti used to be a constant in our lives for as long as I can remember; in fact, one of my earliest recollections were the white-washed exhortations on every blank wall and roadside culvert to ‘Vote No’. I was too young and stupid to know that that graffiti (if such a word existed then) was part of the theatre surrounding the 1951 anti-communist referendum.

Graffiti had been out of fashion for a generation, so it was a surprise last December to be confronted with the same old (hurried) scrawl, this time opining ‘200 Jobs + 40,000 Books Pulped: Shame’. We knew about the job cuts, having already carried a story in the first issue of our community paper about the redundancy furore on the University of New England (UNE) campus. But book pulping?

A chill goes over me whenever I think of book destruction, or the destruction of anything that concerns the record of humankind’s progress towards a more civilised state of living. For example, there was that nasty affair at the Sydney Morning Herald 30 years ago when some 400 subject files of newspaper reporting were (burned, buried, dumped, evaporated — who knows) removed from the company library and then promptly vanished.

(I still fume when I think what was lost by that bloody-minded action, such as the daily reports of the unfolding negotiations at Bretton Woods, 1944, to rebuild the world economy in the wake of the Depression and World War II. So that if anyone ever wanted to go back now and see whether we might have done it better, they can’t.) Thus, any hint that book-burning (or pulping) is back on the agenda can be guaranteed to get my fists up.

Therefore, an email was sent to the UNE librarian requesting information as to what books were being pulped and why; whether it was a question of precious space needed for more important purposes; or whether, God forbid, it was because the university administration had obliterated whole subject courses for which the relevant books of research and study were no longer needed. Despite a follow-up phone call, a reply has still not been received more than three months later.

The University of New England is a public institution (as far as I know) and not part of the Deep State apparatus and I’m a member of the public so why should such an innocent question be treated with such obvious suspicion. One could plumb this question to reach a state of madness, but as it inevitably leads to our present prime minster and the artform he has developed in giving non-answers to straight questions, I’ll leave that to another day.

For the moment, the question to be addressed is what is happening to books and the libraries that were supposed to protect, and promote, them and their contents. Luckily, this was the subject of intense scrutiny a few years ago by Michael Wilding, a former English literature academic at the University of Sydney, who wrote up his findings in a still internet-accessible article in the Sydney Review of Books.

Unsurprisingly, Wilding dates the attack on books and libraries to the Reagan-Thatcher era of the 1980s where, gradually, the only value of any ongoing worth in Western countries was the financial. Wilding then goes one step further and adds another motive behind the rise of neoliberal monetarism, it being the vengeance of philistines for the upheavals of the 1960s and ’70s. With his ‘proof’ being that the destruction visited on universities in the form of savage cost-cutting, has fallen overwhelmingly on the humanities, which were seen as the incubators of student radicalism of the time.

I submit that the far higher fee structure imposed on humanities degrees in 2020 by the Morrison Government could arguably fall under that umbrella. Yet, that is not the real point. The purveyors of the philistinism of the ‘modern’ university would never dare support their project by damning the quality or relevance of the books they purge from libraries. In such a weasel-word age as our own, that would sound too much like the Nazi book-burners of the 1930s. And we couldn’t have that.

Instead, they peddle all the modern high-tech mumbo-jumbo about digitisation and rationalism, inferring that the utility of every book removed from the shelves is actually enhanced by giving it a digital presence while limply saying that should anything go wrong on the digital front — like the increasingly common threats of hacking and cyber attacks — then the physical book itself is in secure storage and therefore retrievable.

Wilding draws on so much evidence that he gives the complete lie to this drivel. Overwhelmingly, most of those books are gone forever, taking the knowledge they embody with them. And, he adds, where they have been digitised what is not said is that as storage technology changes at ever increasing speed, in time it will become inaccessible. (I remember saving a ‘masterpiece’ on 5.25 inch floppy discs; it’s a good thing no one else thought it was a masterpiece because it would now be as accessible as Oliver Cromwell’s grave.)

The irony in all this is can be found in Wilding’s example of the Domesday Book. This famous document was initiated by William the Conqueror in 1086 to be the first great census of his new kingdom of England. A copy of the Domesday Book still exists and some techy enthusiast decided to electronically store it so there would be wider access to it (so he claimed) by historians, students and the general public.

That was only 20 years ago and because of technological change, the platforms used to preserve it electronically have all been subsequently superseded so that the only version of the Domesday Book that can be read today is … *drumroll* … the original written version. Just imagine if some slick ‘change manager’ had said, “don’t worry about it; we’ll store it in a secure place.” Meanwhile, the philistines are still burning books in deed if not in name.

My last thought when I cobbled this sad little tale together is that kerfuffle of a few years ago when Tony Abbott and the Ramsay Centre endeavoured to persuade various universities to establish courses in Western civilisation. I wonder whether it crossed their collective mind that Western civilisation is not a course, it’s a library holding a million books on every conceivable subject. And that its real enemies are not a few jihadis in the deserts of Syria, but an endless stream of can-do Western bureaucrats who will always find a ‘modern’ reason to clean the shelves of irritating, useless, boring, out-of-date books.