‘Knee replacement agony: What I wasn’t told about pain and complications pre-surgery’ 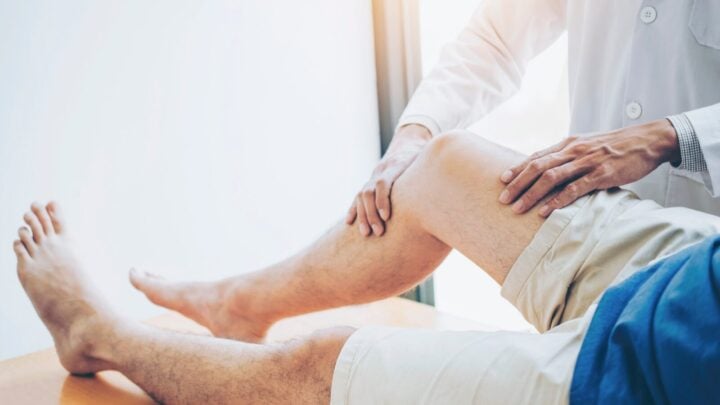 Rod recently underwent knee replacement surgery, but the recovery has not been as straightforward as he would have hoped. Source: Getty Images

Remember those old, pre-television radio serials that glued most of us, night after night, regardless of age, to the crystal set or, if we were a bit more flush, to the polished walnut radio cabinet with its cloth screen covering the loudspeakers? And, particularly, When a Girl Marries with its memorable intro: “Dedicated to all those who are in love and to all those who can [announcer’s emphasis] remember.”

Well, this short contribution is dedicated to all those who are about to have knee replacement surgery and all those who can remember what it was really like. Because knee replacements are generally regarded as a rite of passage for the 70-plus cohort when all their sins eventually catch up with them. Because mine certainly did. And thus this cautionary tale.

It all began on the 25-yard line (now 22-metre) at the northern end of Sydney’s Chatswood Oval in early March 1964. I was 19 at the time and having had an unusually good season in 1963, I had become slack with delusions of greatness and, as a consequence, had not prepared my body sufficiently well to deal with the gruelling encounter that is testosterone-fuelled adolescent rugby.
Having the concrete head of a teenager, I had ignored the warning of repeated penalising I had received throughout 1963 for dangerous play.

So, an up-and-under designed to crash-tackle the opposing fullback saw most of me hit the turf on one side of him and my lower leg on the other (how well-deserved), leading to the removal of a cartilage — and the end of my rugby career — a short while later. Yet I stumbled on regardless, only really bothered by the knee on those rare, perishingly cold winter days when not even whale blubber could keep a southerly wind out of one’s bones. Until …

Until, we bought a greyhound puppy in 2003. Now, greyhound puppies are lovely dogs, enduringly affectionate, but they are ‘sight’ hounds, which means that if they spot something, off they fly. And so it happened, often enough, when exercising (on a lead) our dear pet. Inevitably, my right leg became a kind of foot-break to restrain her natural instincts with the inevitable result that the damaged knee eventually packed it in.

I may give you an idea of the extent of this ‘packing in’ by referring to a question asked by the orthopaedic surgeon at his first consultation last April: “Is your leg starting to bow?” To which I replied: “Robin Hood could fire an arrow from it.” He thought that was funny. I didn’t.

In any event, the operation took place in mid-May with two slabs of titanium rammed into the joint and much scraping away of calcium and sundry rubbish from the bone acquired over half a century of misuse. And then the hard part started.

I knew that there would be some heavy physio sessions awaiting me, as I remembered the unpleasant post-op experience when the originally torn cartilage was removed. But physiotherapy must have evolved exponentially since 1964 because what I have now experienced is quite unrecognisable from my first major brush with the profession.

Bemused, I went back to all the literature plied to me prior to my op this year, to see what I must have missed. There was certainly a lot of assistance offered over ‘the resumption of sexual relations’, including really ‘helpful’ stuff about positions, frequency, duration, enthusiasm — you get the picture? — but absolutely nothing about the shock-horror message conveyed to me by my physiotherapist in the security of her consulting rooms.

“You have a window of opportunity of four months to get your knee back to proper working order …”, referring to the pathetic shepherd’s crook that was my right leg, “… otherwise your leg will stay frozen exactly as it is. Forever.”

She’s a lovely woman with a pleasant ‘bedside manner’ but I can’t help seeing rushes from the 2008 Kate Winslet movie The Reader whenever I undertake the latest ‘exercise’ she has inflicted on me, especially one monstrosity when a towel looped around my right foot is dragged towards me to force the knee to bend in a direction it has no interest in going. Agony! (When I asked whether she had been trained at Belsen, she also laughed. I didn’t.)

Two months have elapsed since that four-month wake-up call and I have endured a whole battery of so-called exercises, of increasing fiendishness. One, whereby, one’s wounded leg is forced under a low-seated chair and held for 30 seconds — allegedly to increase the degree of flexibility in the knee from about 80 degrees, immediately after the operation, to something greater than 120 degrees. Fifteen such actions, three times a day. Agony plus! No wonder a retired local bookseller told me recently that her knee-replacement physiotherapy had reduced her to desperate tears.

As I write, I’m left with just under two months more before the belatedly-admitted window of opportunity closes. I can see some progress — at least at shoving my poor bloody leg under a chair, an exercise so obviously necessary in the real world — but not so much improvement that the leg no longer looks like a shepherd’s crook. More like a orthopaedic walking stick at this stage, I’d say. So, we shall see.

Have you had surgery? How was your recovery? Were there any complications?