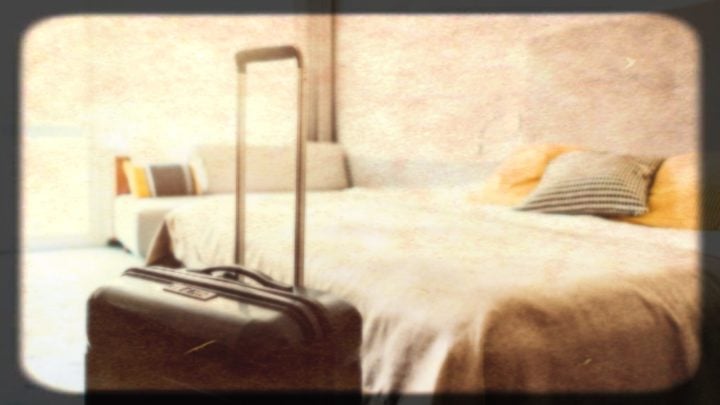 For a while, John ran a motel and there are a few stories that still tickle the funny bone. Source: Getty Images

Over the years, I’ve written a couple of times about some of the hilarious events that occurred in the days when my wife and I ran a supermarket, such as the time I picked up a 10-kilogram bag of rice for young mum, Anna, only to have Maria, her mother, thank me because, “Her piles not good since she have her bubbies.”

Circumstances were different when we changed direction (the motel business), but the people most certainly weren’t. Oh, and of course a different platform provided a different kind of humour.

A woman, a brand manager for a national company, came from interstate to stay with us on a monthly basis, always for two or three nights at a time. She was a right character, always prepared to have fun with us and our staff. One evening in our restaurant, late, staff long gone, I opened the last of several bottles of wine, pouring for Anna and her three lady guests. Discussion lulled for a moment while I poured. I leaned forward, speaking in a stage whisper to her, “Sorry, Honey, I forgot, what time you want me to come and scrub your back…?” The screeches of laughter could have been heard on the other side of Bass Strait. Got her own back though, didn’t she? The next morning, my wife and I both in reception, Anna leaned over to me as she stepped out, saying, also in a stage whisper, “Loved the back scrub last night, Honey…!” with a grin from ear to ear.

The motel was old. The original building, converted to its modern guise, was built in 1870. It was essential for plumbing and electrics to be brought up to modern standards, although the plumber refurbished a number of old tap fittings. These worked a treat for many years, but one decided to fail in the most embarrassing of circumstances. A local businesswoman made an inspection of the property. She wanted something unique for a large group of interstate visitors coming to an event she was staging. She loved the old buildings and asked to check out the plumbing. My wife took her into a bathroom to see how it was equipped and to show how the original brass and printed porcelain taps had been adapted for reuse. Reaching out and turning a tap handle, the whole spigot came out, followed by a blast of very strong, very cold water. Both women got saturated … and I found them a minute later almost literally rolling on the floor in laughter, too helpless to get out of the spray of water! We still got a two-night booking for 10 rooms, though.

One funny happening occurred after we’d left. Our little chef had a kitchen tap decide to spring a leak. She wrote a message for the new operator to see if he’d do something overnight about the drip so it would be ready for her early (and invariably busy) breakfast session. He did something about it, all right, but instead of the new washer she expected, he’d put a sticking plaster over the spout! You’ve heard the humorous definition about an expert, haven’t you, a drip under pressure? Well yes, that he was. Literally!

It was the time of a V8 Supercars round at a local track, and the motel was always booked out year ahead. Mr Smith used to come from Sydney every year with a permanent booking for the Honeymoon Suite. Every year when he arrived he seemed to have an ever younger, ever prettier ‘Mrs Smith’ with him.

I need to explain the makeup of the motel for a moment. It had been built in the 19th century as a bakery but now had reception and a customer lounge on the ground floor where the bread-making equipment once stood. The Honeymoon Suite was on the first floor, directly above, in what was the original storeroom for wheat and flour and other bakery needs. The original heavy timbers were sound and had been retained, but of course some gaps existed. Planking was laid across the original, with suitable modern floor coverings.

On the evening following the first day of practice for the car racing, a group of visiting oil company executives entered through the back door of the lounge just in time for a drenching! Mr and Mrs Smith had decided to fill the bath and hop in together! Both of rather ample build, this caused an inevitable overflow. Water simply poured through two layers of flooring and down into the lounge. Thankfully, everyone took the whole event well, especially when the Donald McGill-esque Mrs Smith appeared, giggling and draped in a towel, requesting more towels.

This is getting lengthy and I haven’t even got to the end of the watery stories, so here’s one last. Marg was a sole world traveller, large, 40-ish, English and loudly funny. She was a real character, and even her potentially dangerous misadventure while with us failed to dampen her humorous outlook. She was a huge woman, her every part jiggling, straining at and even beyond her clothing as she walked, but totally unfussed about her bulk. She had stayed the first of her three nights with us and I was walking outside her room, about to strip a bed next door, when I heard her call, “Help! Are you out there?” I knocked on the door and called out to check on her. Again she called for help. I used the master key and let myself in, now hearing her call coming from the en suite. The door was closed, so I knocked. She told me that I needed to enter. Usually, in circumstances like this, I’d have one of the female staff enter with me but it was still early so none were yet available.

I opened the door to discover quite a sight.

Our large, loud Englishwoman was lying on the floor, totally naked, wedged between the apartment wall and the glass wall of the shower. The toilet pedestal — a quality (?) brand less than a year old — must have had a flaw in the porcelain. Under her mass, it had collapsed, thankfully without harming her other than for a minor abrasion on a thigh. Marg was totally naked. Laughing her head off the whole time, after I passed her a couple of bath sheets as covering, she asked if I’d be a darling and help her up. Now, I’m not exactly a small man, or weak, but that was a massive undertaking. Between us, we managed it, but bits of her kept popping out, causing gales of additional laughter. She even asked at one stage if I liked her Brazilian? I preferred to remain diplomatic, pretend I hadn’t noticed, but she said, “You never know your luck, mate!” and burst out again into almost uncontrollable chortles!

It is truly a great life if you love people!

Has anything funny ever happened to you while travelling?