‘I already knew I was gay when I married Hi-de-Hi! star Su Pollard’ 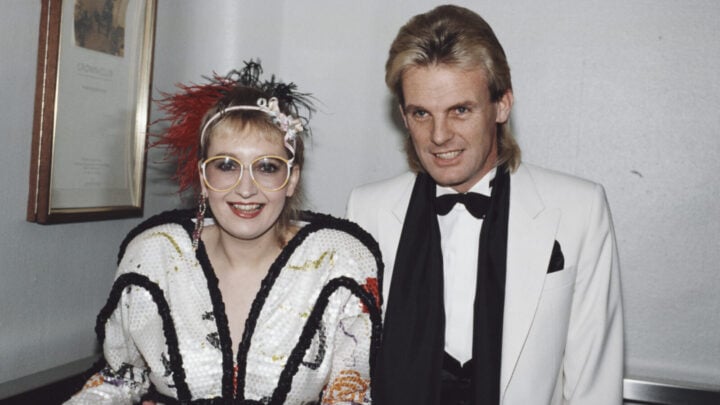 Su Pollard at the 1986 BAFTA awards in London, with her then-husband Peter Keogh. Source: Getty

Growing up I always felt that I marched to the beat of a different drum – that is until I discovered that there was a whole bunch of people who marched to the same drum. And I’m so glad I did because it opened up a whole new world to me, one that I am happily involved in to this very day: the world of theatre.

I was about 15 years old when I discovered a group called the Beaumaris Players in Melbourne and was offered a role in a play called The Shop at Sly Corner. At the time I had a terrible stammer that caused me great stress. However, after learning that I would be playing a character who did not have a stammer, I was able to play the part with no issues, my proud Mum and Dad watching on in the audience.

I then moved to Melbourne and as a schoolboy I met backstage, and interviewed for my school newsletter, the multi-talented performer Tommy Steele – in his boxers – who was very kind to me. His manager, however, was another story.

It was a few years later that I returned to Perth and started to work, albeit voluntarily, at the Playhouse Theatre – painting a dressing room for the arrival of the big star at the time – Googie Withers – who when she arrived was very regal but also very charming. At the Playhouse I was also very actively pursued by a well-known gay actor who would quite literally chase me all around the space under the stage, which was used for sets and costumes. He never caught me!

My parents then moved to Sydney, where I was fortunate enough to obtain work at the Sydney Opera House as a tour guide in the operas Carmen, Lakme and Aida and as an usher, starting on the opening day in 1973. Exciting times indeed. Whilst there I met, amongst other stars, Carol Burnett – who when I told her that the Opera House mural looked better by night said, “Don’t we all dear!” and Dame Joan Sutherland who berated me for keeping her in the cold as she signed a programme for me.

By then of course I was totally hooked on being involved in theatre and my life there took me on some magical journeys. After the Opera House at both the Theatre Royal and then His Majesty’s I worked with, and got to know quite well, some of the most memorable people in show business. People like Peter O’Toole who I played cricket with; Douglas Fairbanks Jnr – a total gent; Stanley Holloway, who was exactly as he appeared in his movies; Derek Nimmo – a tough taskmaster; a very young and very good looking but also quite shy Mel Gibson; Peggy Lee in a wheelchair backstage at The State Theatre; Julie Anthony – such a great talent; Geraldine Turner, who was magnificent on stage; Taina Elg, who spent Christmas with my family; Jill Perryman – now a dear friend; Reg Livermore – supremely talented; John Farnham and Colleen Hewett, who shone as the lovers in ‘Pippin’; and of course the late, great Debbie Reynolds who became a close friend.

I then moved to London, where I married the British actress from the hit BBC series Hi-de-Hi – Su Pollard – so talented in so many ways with the most incredible voice. Through Su, I met some of the biggest stars in Britain including Barbara Windsor – petite and very funny; Paul and Linda McCartney backstage at a Royal Variety Concert – both very friendly; Joanna Lumley – delightful; Jean Simmons – beautiful; Dame Anna Neagle – very sweet; Beryl Reid – very camp; and the three stars of the series The Golden Girls who we later saw film the series in Hollywood.

Su and I also attend a luncheon at The Savoy Hotel for Princess Diana and had a lovely chat with her and met her again at a small function on the side of Westminster Abbey. She was exquisite and very, very friendly. In London, I was Chairman of the King’s Cross Boy’s Club and as such was invited to a private function at Buckingham Palace hosted by the Duke of Edinburgh. Surreal and a day I will never forget.

We then flew to New York where Su performed and we attended a cocktail party with Jane Powell – like a little doll, Alexis Smith – tall and willowy, Van Johnson who when asked by Su whether he was married or gay replied – “Well I’m not married dear!”

How lucky have I been to have experience all the above plus much more while working in an industry that has become my passion.

Did you enjoy Peter's story?