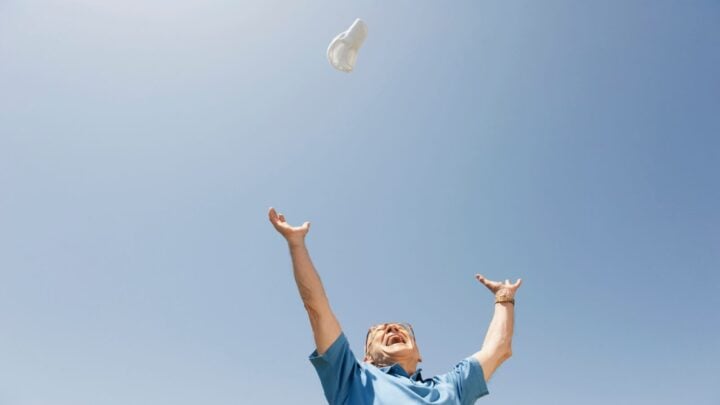 Turns out laughter might be the best medicine for relieving painful constipation. Source: Getty Images

Laughter, writes yoga master, Satyananda, is the ‘most excellent of yogas’. When I fell in love with yoga 45 years ago, I would have been surprised if someone told me, that one of the lasting benefits of yoga practises would manifest in no other place, but over the humble toilet ball, while being engaged in the not much discussed business of having a bowel movement.

I could not have imagined that I would be treated to windstorms and thunder over the throne. These storms do not rage outdoors but are elicited in my bowels through belly laughter.

For that is exactly what has been happening to me over the last 45 years: Squatting on the toilet to empty my bowels while I have been laughing my head off. Not at any jokes. Rather, because I have been laughing at nothing at all. It has been sheer joy; fun. That happens to be quite funny. (I learned to squat on the toilet because it is far more beneficial for pooing and for many other things than sitting.)

Notice how often young children giggle. Not because they find anything funny. Funniness comes from having fun. They are amused by their first, fresh encounters with life’s wonders. Then they smile and laugh, which in turn cheer them up, humour them. It is laughter that develops their sense of humour, not the other way round.

Like it or not, emptying the bowels is a vital necessity throughout our lives. I am in a rush to wee, first thing in the morning. It is the urge to do so, that tends to wake me up. I would be glad if the urge for poo was also there then, but it rarely is. Rather, I have a routine that seems to help the bowels to gear up for evacuation.

I start the day swallowing a big spoonful of virgin oil with a pinch of salt and drink half a litre of water with the juice of a whole lime squeezed into it, using a straw, to protect my teeth from the acidity of the lime.

Then I go outside barefoot into the grass and do Salute To The Moon followed by Salute To The Sun yoga practises. These composite exercises are supposed to stretch all my muscles including those relating to bowel movements, so that I am more ready for a bowel motion.

Or am I? Alas, not always. The urge may be there but not the motions.

This has been happening more often lately as I changed my diet to increase protein and minimise my carbs intake. I made the change because my blood glucose level measured a three monthly average of 6.1, which is a pre-diabetic blood sugar level. I cut out my favourite breakfast food, porridge, from my diet, as it is high in carbs. The result was some hardening of the stools and less spontaneous bowel movements.

This is where Yoga with toilet humour came handy. Squatting on the toilet while belly laughing always helps me to empty my bowels.

Recently I woke at 5:45am by an urge to go to the toilet. As I was squatting there, very sleepy, I blocked off my left nostril, to facilitate the flow in the right nostril, which helps with pooing. I slowly began to do bellow’s breath (bastrika). Then these thoughts came to my mind: Every time I went outdoors lately in pitch dark, as soon as the first light occurred, at the break of dawn, I heard kookaburra laughter from the bush.

What a great way to start the day! To laugh as soon as you wake up! Why would the kookaburras do that? And then came the next thought, which I found amusing:
Maybe laughing together is a collective way of inducing the emptying of their bowels?

Perhaps this is not a really silly idea. Maybe, after a night of sleep, laughing is there to wake them up through clearing their throats, deep breathing, to greet one another and to cheer up the whole tribe for the day by relieving themselves of the poo, so that they get lighter before they fly off to start the day of hunting for food.

And what about shaking off fear? I noticed in watching birds, that often before trying to escape from perceived danger by flying off from a tree branch, they would do their droppings.

Could there be an evolutionary connection between laughter and pooing, something, that in our ever so ‘refined’ civilisation we forgot?

Think about the baby’s first smiles. Often it may start as mere grimacing as they pass wind or poo themselves. Then the mother smiles and laughs, ‘Oh my baby is smiling at me!’ So the baby is reinforced to smile and laugh by the mother’s warm reciprocal smile whenever he/she smiles or giggles near her.

I laughed even more enthusiastically, while squatting on the toilet bowl.

Did philosophy also began with pooing? I mean, how come that so many interesting ideas originate in the toilet?

Yet the opposite to pooing, chronic organic constipation, though rare, can even kill.

Recently, I read a theory about the death of Elvis Presley. Though the official autopsy report will not be released until 2027, this particular article alluded to the King’s death as being from chronic constipation.

Be warned, if you are an Elvis lover you might find the following information rather distressing. As we all know, Elvis was found dead, face down near the toilet bowl, from where he seemed to have fallen as he died. However, Dan Warlick, chief investigator for the Tennessee Office of the State Chief Medical Examiner, attended the autopsy and fuelled the popular theory that Elvis died while straining to go to the toilet.

As disgusting as that might sound, it’s been claimed they found solid faeces in his bowel, likely to have been trapped inside him for a period of at least four months.

Claims the singer died of a drug overdose were disputed by coroner Joseph Davis in 1994 when he said, “The position of Elvis Presley’s body was such that he was about to sit down on the commode when the seizure occurred. He pitched forward onto the carpet, his rear in the air, and was dead by the time he hit the floor.

“If it had been a drug overdose, [Elvis] would have slipped into an increasing state of slumber. He would have pulled up his pajama (sic) bottoms and crawled to the door to seek help. It takes hours to die from drugs.”

Imagine if he’d developed the habit of belly laughter laughter in the toilet to facilitate the opening of his bowels.

Why not restore the humble toilet to perhaps its greatest evolutionary role in cheering us up through belly laughter, whenever we give birth to a poo.