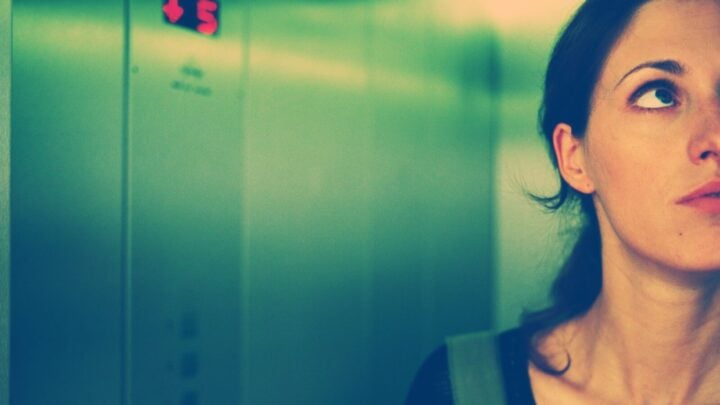 Debra was trapped in a lift once, but it was nothing compared to the phobia she says she got from her mother's own fear. Source: Getty Images

My friend Sandra was driving to work one morning when she pulled down her sun visor and a large, live huntsman spider dropped into her lap. She screamed, pulled the car over to the side of the road and leapt out in a shaking, teary mess.

Not wanting to be late for work but point-blank refusing to re-enter her car, she rang her manager who picked her up on the side of the road and they headed into the office. Three days later, she returned to collect her car after friends were sent to ‘detail’ it — i.e. clean it out top to bottom to ensure the spider had gone.

The large but harmless huntsman spider is my nemesis too, but I think my phobia is historical rather than an hysterical reaction like Sandra’s above. My mother was terrified of them and instilled that fear into her children!

Back in the 1960s, our house had a long hallway from the bedrooms leading into the living areas. We all staggered out one morning, kissed Dad goodbye as he went out the door to work and moseyed into the kitchen for breakfast. Then there was a blood curdling scream! Mum!

Above the doorway we just walked through was a very large huntsman. Spread-eagled. Big. Palm size. Mum yelled: “You must not walk under that doorway, they jump, they’ll get caught in your hair. I must call your father to come home!”

She waited 30 minutes for him to get there, rang his office begging him to come home ‘immediately’. She would “keep us all safe in the kitchen” until he arrived. Another 30 minutes passed. He walked in the door, got our pudding bowl out of the cupboard and a sheet of cardboard from the laundry, captured the damn thing after a chase across the wall, took it for ‘a bit of a walk’ into nearby paddocks, and that was that. He kissed us all, jumped in the car, and headed back to work. Mum’s hero!

He was called on to be heroic numerous times as huntsman spiders were a common problem due to our proximity to surrounding scrub. They appeared frequently at Christmas as they were transported in pine trees ready to decorate; or escaping the summer heat by crawling inside through open windows and doors. Mum was a nervous wreck most summers due to her phobia and it gave us kids the heebie-jeebies.

It’s useful to define what a phobia actually is … basically it is ‘an overwhelming and debilitating fear of something’, be it an object, place, situation, feeling or animal. It is more extreme than fear in the normal everyday sense and develops when a person has an exaggerated or irrational perception of danger or threat about a particular thing.

The most common fears in people are logged as:

Some of the stranger ones from a very long list indeed are:

There’s even elevatophobia — the fear of elevators — the most common trigger of which is getting stuck in an elevator for a long time due to a power outage.

As for me, I don’t have any phobias apart from Huntsmanophobia, ha ha. Spiders in general don’t worry me, though I do religiously shake shoes before putting them on after having a few scorpions in the house.

Heights? Nah. Flying? No. Caves? Hmmm. I don’t have claustrophobia, but I don’t really enjoy the underground sensation.

I was stuck in a lift once, all by myself, for about five hours. It was an old office building in Melbourne’s CBD back in the 1970s. The stupid thing was that the lift was jammed on the fourth floor and the doors wouldn’t open! People were yelling from the outside and I was yelling from the inside. No matter what anyone did to jemmy the doors open, it didn’t work, so theelevator company was called. I knew they’d get me out, it was just a matter of waiting. It was so boring!

The only scary part was them jiggering around with the lift sending it up, down, shaking it, until finally something worked and the doors opened. I had to step down about two feet as the lift didn’t align with the floor surface, and that was probably the most exciting thing about the whole episode. I couldn’t fathom why fellow workers were terrified that it would be them if it happened again. It was a tedious ‘adventure’ indeed.

I seriously don’t like dark water where I can’t tell what my feet are going to land on. Are there submerged logs, sharp branches, something hiding on the bottom that could hurt me? I think that is a rational and reasonable fear, but not a phobia.

My friend Joan has a water phobia, which is crazy as they have a pool and their holiday home is beside a lake! She is petrified to put her face in the water and has a unique way of dog paddling about with her head held high. But maybe that’s not a true water phobia, more a ‘submerge your face’ phobia.

Do you have any phobias?