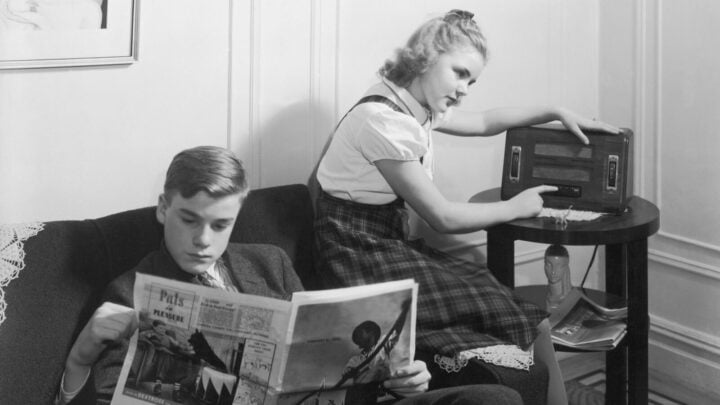 Listening to the music used to be so different! Source: Getty

When my DVD and CD player recently died, I realised I never used them anymore, so got rid of my CDs and used bluetooth to stream music from my phone either through earbuds, a speaker, or the car. Very smooth and easy, and far less “stuff” in the house. However, it got me thinking about how we got to listen to music when I was a child.

On a shelf in our lounge room was a large bakelite radio, or ‘wireless’ as Dad would call it. It was brown, with a mesh behind a decorative cut-out panel, and it had knobs to turn it on and off. It even had its own smell, as it warmed up ready to play music for us. We all had our favourites. Mum would listen to radio serials, Portia faces life, The Archers and one about a doctor. We kids enjoyed them too. She also loved Jim Reeves. I can still remember the strains of Where We’ll Never Grow Old.

On Sunday mornings there was the children’s request session. We wrote in to request our favourites. I would weep through the Little Prince and loved the one about the Pokey Puppy. On Saturdays, Dad would listen to the cricket or the footy, or he would listen to the old transistor radio he had in his shed when mum would moan about “all that sport we have to listen to”.

As a young teenager, Mum and Dad invested in a radiogram. Very flash. It was in the front room and stood on legs. It had a radio and played records. I bought John Mayall and the Blues Breakers, and also The Cream to play ‘In the White room’ at high volume. Mum would come tearing in to tell me to turn off that dreadful noise. But I didn’t really listen, and the minute she went out, I would sneak in to play my music at top volume. I bought EPs and a few LPs with my pocket money. Jimi Hendrix was a firm favourite but the rest of the family was not keen.

By the time I was turfed out of home at eighteen for supposedly joining a cult, music took a back seat for a while. Marriage, kids and domestic life occupied me, until years later, when newly single again, I got my own stereo and discovered CDs and grunge. Nirvana and Soundgarden and so much more. I made up for lost time. But that phase passed and now I’m a bit of an easy-listening nana, with an eclectic taste in music. A bit of jazz, a bit of rock, some classical and some world music make up my day. Also a little bit of contemporary Christian music.

Ah, but the memories awaken when I hear the opening rift of a Pink Floyd classic. Music is the soundtrack of our lives, and however it is presented to us, it is essential to reflect both our moods and moments.