‘How much more outrage do we need for rape allegations to be taken seriously?’ 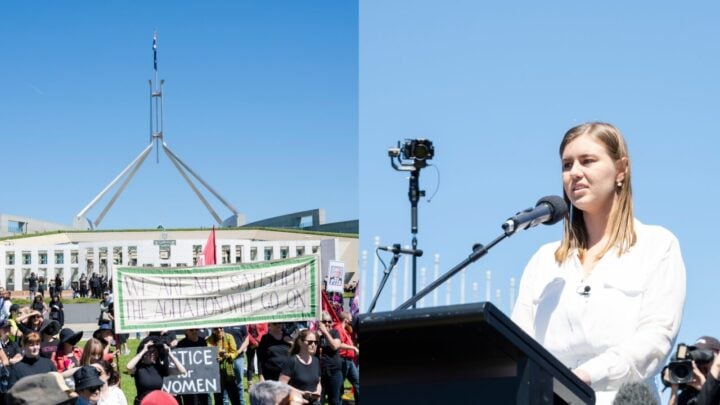 There’s one old saying: You’re on a hiding to nothing, and an even older one: Fools rush in where angels fear to tread. I’m having cause to consider both these old saws as I watch the furore over rape, assault and consent plus possible foot-dragging by police investigators (and the certain absence of political leadership) in a situation that is steadily evolving into a crisis with no obvious way out.

I would have said it is asking for trouble for a male to intrude by suggesting a course of action to women who are justifiably steamed up about their treatment by men — at the nation’s highest level, no less. But when you have reached a conclusion, as I have by now, that this situation has exposed the limitations of our prime minister in not being able to respond in any way other than in playing word-games and dodgy footwork, then if Mr Morrison has nothing further of value to add, that does not excuse the rest of us.

I’m reminded of an anecdote about the former United States president Lyndon Johnson when Senate majority leader. There was a tight vote on the senate floor, only one vote in it, and Johnson had staked his prestige on a bill’s passage. So, he summoned the newest senator to his office and, without looking up, ordered the man to change his vote, otherwise ‘the goods’ he had on him would be plastered all over the front pages the next day. It didn’t matter that LBJ was bluffing, because the senator changed his vote and the master manipulator’s reputation was undimmed. The moral: everyone has a skeleton in his/her closet of which they’re not proud. And I acknowledge mine at the outset, before moving on to my topic.

It seems to me, and a couple of others who I have discussed this matter with, that by allowing the debate over the specific accusations of rape to drift into a general discourse on toxic macho culture, no matter how valid, the result is a diffusion of focus, leading almost inevitably into inquiries, reports, platitudes and obfuscation, resulting in little or no concrete solutions, which might do something to change the actual culture.

I look at the anger that built and built in the gay community as the evolution from police entrapment and gay bashing lead nowhere towards those monuments that could signify a legal improvement in the lives of homosexuals. Until the equality in marriage referendum. That was an achievable goal worth fighting for because it was a visible outcome. It changed people’s lives and didn’t end ‘civilisation as we know it’.

I started thinking: what specific changes in the law might result in a material improvement in the lives of women who are assaulted by men? In this regard, I looked back to when Neville Wran was premier of New South Wales, and saw that there was one major reform that qualitatively improved the experience of rape victims in court. That was that it was no longer permissible to allow a defence for the accused in trawling over the victim’s own sexual history in order to break down their credibility.

(Naturally, the existential need for some accused to break down the victim’s credibility, will inevitably draw the defence lawyers into other avenues. I noted, in this regard, the observations of a retired police detective on the ABC’s Q&A program recently that a wealthy or well-connected accused can hire the best barrister in town who will have a field day slaughtering the victim in the witness box and, as the detective said, there is nothing he could ever do to protect the victim.)

Is there a viable objective that is possibly attainable, upon which the rising anger of women can be focused with a qualitatively better outcome for victims than the miserable outcomes that are likely at present? From two high-profile cases among those, which have ignited public fury, I can think of two — that it becomes a felony to tamper with a crime scene, and that it becomes mandatory for crimes to be reported to the police immediately. (As a non-lawyer, if this is tosh, my apologies.)

(It may be that both these suggestions are already on the statute books, but the whole issue is so shrouded in shadows and fog [never to forget prime ministerial bullet-dodging] that you’d be forgiven for thinking not. Moreover, and I’m not sure how this would work, the whole process of police interviewing of victims ought to be subject to some legal oversight.)

My reason for saying this is that when I see that a victim may have had half a dozen meetings with detectives — which gives some indication of how seriously she viewed her own complaint — but then suddenly drops the complaint, I ask myself, was she shepherded into acquiescing in such an unlikely course of action so that the particular police officers involved did not have to pursue a matter they were unhappy with. For whatever reason.

I have seen it once, myself, from second-hand, as it were — an outrageous undermining of the credibility and self-belief of a complainant in a closed interview room that can only be called ‘verballing’. Sadly, there are many good cops and a few bad cops, but while there is so much deflection and dodging and semantics dominating our political discourse, a victim could be forgiven for never going near the police.

This leaves me with a final suggestion. The greatest cries of outrage are the statistics, which show of all the rape and sexual assaults that occur, the conviction rate is about 2 per cent, hardly an incentive for a frightened victim to run the gauntlet of an unscrupulous cross-examination from a pumped-up defence lawyer. Clearly, the normal burden of proof in criminal matters — ‘beyond reasonable doubt’ — is totally inadequate in a situation where the power imbalance between victim and perpetrator is so unequal and unfair that it needs revisiting as a matter of urgency.

You cannot have this much distress in the community, and it being allowed to fester daily while, sort of, shrugging your shoulders and saying, in effect, “that’s life”. It doesn’t have to be. Therefore, I don’t think it is beyond the wit of a decent parliamentary draftsman to put together a form of words that might address the unhappiness in the community that the conviction rate for one of the most historically heinous crimes against the person, is a disgraceful 2 per cent.

Why not this as a first step to get the grey cells rolling? Instead of the normal burden of criminal proofs, why not something like the civil burden of proof — “on the balance of probabilities”. That seems closer to the reality of the evidence put before the courts. You never know, it might even encourage some potential abusers to realise they can’t automatically get away with it. Then women can live their lives in some relative safety.