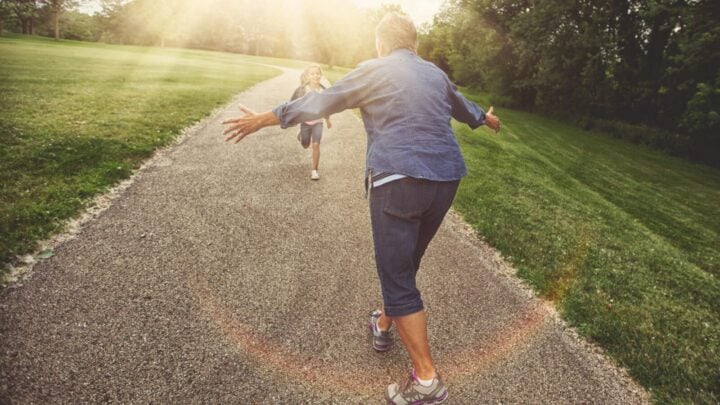 This community writer has been frozen out of the lives of her 'grandchildren' because of her daughter's messy divorce. Source: Getty Images

I get it. Life in the 21st century is not easy for any of us, but last Christmas really bought it home to me as both my adult children had to ferry their offspring to their respective ‘exes’ for the rest of the day. Even my own ‘ex’ had to rush with his wife to her various split family situations to share a part of Christmas. Yet what made it really sad, was not the fact that my daughter was there with her three children on her own — it was a relief that she was no longer with her alcoholic abuser — but that his three children who are my ‘step-grandchildren’ are no longer part of our family. He has forbidden them to see her as she had to have an AVO (apprehended violence order) taken out against him and part of that was the removal of weapons from their home.

Perhaps I should elaborate. My daughter, a single mum on her own for may years and with a seven-year-old boy met a ‘wonderful’ man. Handsome, charismatic, a business man — he was on his own after a messy divorce. His ex-wife, according to him, was totally to blame, but had full control of his three children. He was granted access when he married my daughter.

I had a motherly instinct that he was full of excrement, but she was so in love and he was so charming, what could go wrong? Well, everything. We learned the meaning of gaslighting, of coercive control, of what life was like to live with a full-blown drug taking, mentally unstable alcoholic narcissist with a penchant for conspiracy theories. Walking on eggshells, reading his moods, cleaning up his mess. She gave it seven years. Left several times with his promise to change — but of course that never lasted. When she finally left after he had drugged and raped her, he of course blamed it all on her and is unable to take ownership of any of his actions.

He immediately got a ‘new family’ — a woman with two small children whom he has reinstated as his ‘wife’ and is trying to impregnate so he can have even more children to destroy. He is still married to my daughter legally and she is trying to get the financial settlement finished, but he is using delaying tactics as he wants it all.

Among the collateral damage are the children. My daughter’s son, who is now a teenager, has had yet another ‘father’ let him down. This man’s two little girls to my daughter are traumatised by another woman in their father’s bed and are being bullied by this woman’s two children. One of my granddaughters has regressed severely, is having counselling, and won’t let her mother out of her sight.

But what of his three children whom I’d formed a relationship with over the past seven years? He has forbidden them to see my daughter, even though they all loved the consistency, nourishing meals and clean washing she bought into their lives. As a teacher she was the one who checked their homework, bought them their clothes, did their laundry, cuddled them, nurtured them and basically raised them whilst they were in her home week about. Dad was too busy away working or drinking to be available except to provide the odd expensive restaurant meal or holiday. What they wanted was a loving, stable home environment. That is what my daughter provided and they loved that.

The irony is, as young teenagers they have secretly met up with my daughter and their siblings because they love her and she loves them. We just hope he does not find out.

I miss these kids. As a grandmother I still have my ‘blood’ grandchildren in my life, but my heart is sad that through no fault of mine, or theirs, I am not allowed to see all of those I called and treat like my grandchildren.

If this has raised any issues for you, or if you are concerned about domestic and family violence in your family, friends or workplace, contact the National Sexual Assault, Domestic Family Violence Counselling Service on 1800 737 732, Mensline Australia on 1300 789 978, Relationships Australia on 1300 364 277 or Lifeline Australia on 13 11 14 for confidential support, advice and referral that will help you explore your options.