‘Dana Andrews: Admiration of the man behind the movie star’ 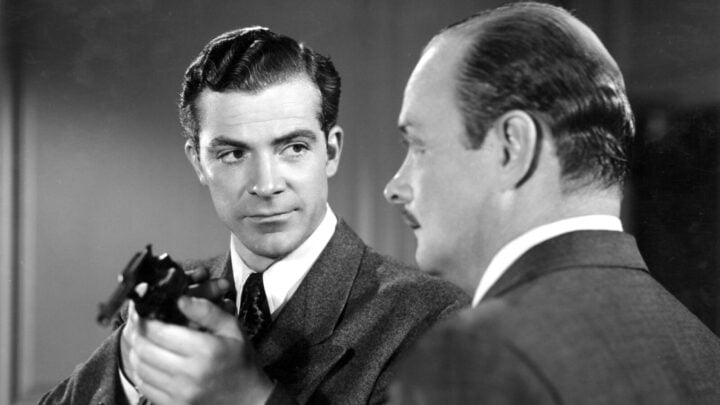 I think I received the highest possible accolade in my life recently. It was a Saturday night and a quiet spell on the family sofa was deemed in order and instead of the usual garbage on the box — like how many times do I need to see re-runs of Kojak? — we decided to dig out an old DVD. Preferably one that neither of us had watched for years.

Before long, and after a groping among various buttons on the two remotes (see, Mum, both hands!), we were settling down in front of The Best Years of Our Lives, the 1946 black and white drama by Sam Goldwyn and William Wyler. I had seen it a couple of times before, but what stayed with me always was the jaw-dropping experience of watching Harold Russell, the mutilated World War II veteran, playing a mutilated World War II veteran. To see him picking up a coffee cup with those hand-hooks. Wow!

I had not realised this movie had won 10 Academy Awards and had out-grossed Gone With the Wind at the box office and, at the time, it was the highest grossing film ever in the United Kingdom. As a serious attempt to portray the lives of returned servicemen and their traumatised families trying to adjust to peace-time living, it’s not surprising it had such an appeal. I had forgotten that it also starred Dana Andrews as a decorated United States Air Force officer who returns to a dysfunctional marriage and the humiliations of his old job as a soda-fountain jerk.

I had always admired Dana Andrews, mainly because his leading man roles were always those of taciturn semi-outsiders who can bear the pain while getting the unpleasant job done. Although, in The Ox-Bow Incident (1943), getting the job done consisted of having his neck stretched by a lynching party, while still retaining his dignity. In retrospect, if I am being honest, I would say that the appeal of such characters, and through them of Andrews himself, must have been that that was the standard I wanted to achieve in myself, while recognising what a hopeless ambition that would prove to be.

So, when my companion turned to me within the first few minutes of the movie’s opening and said, “You know, you look like Dana Andrews,” I kept a straight face but I must confess to an elation I have not felt for aeons. Suddenly requesting a pit stop, I sped to the bathroom and stared at the face staring back at me from the mirror. And the sad fact was that this was no Hollywood star I was looking at.

Behind all the wrinkles and the receding hairline and the sunspots, just faintly could I see where my friend was coming from. I’d always pinned the specifics of my appearance on my maternal grandfather, old Horrie Thomas the school inspector from Perth, Western Australia. But beneath the obviously superficial individuality of each of us, there are common factors, genetics I suppose we would call them now, traits that we share with thousands, probably millions of others.

When I googled Dana Andrews and compared photos of him with those few I have of Horrie Thomas, I can see similarities that would make the claim of my companion watching The Best Years of Our Lives not totally stupid.

I guess I was in the right frame of mind to continue watching this classic movie. It was not long before I was beginning to appreciate the context in which it was made, that is, during the early years of the post-war conservative reaction that followed 20 years of liberal, New Deal government through the benign hands of Franklin Roosevelt and Harry (S. for Nothing) Truman.

Indeed, one could argue that the film was Sam Goldwyn’s attempt to moderate the reactionary wave, which had propelled Richard Milhous Nixon, as one particularly bad example, into politics in November 1946. A reactionary wave that would peak in 1950 when Senator Joseph McCarthy began his crusade to ostracise (or imprison, or deport) many of his fellows, not for what they did but for what he thought they believed.

While it was nice to think that a little bit of Dana Andrews, that taciturn image of the little guy with his back in a corner, had been recognised in me by one person, at least, it was never going to be the full picture. While I could easily admire him in a war drama like 1945’s A Walk in the Sun, where the issues were clear-cut, the enemies evil and the allies noble, how would he stack up in the more ambiguous world of post-war Hollywood and America with their hurly-burly of fear, Red scares and rising McCarthyism?

I discovered that a biography of him had been written, Hollywood Enigma: Dana Andrews, a title which wasn’t promising as it suggested that he might have trimmed his wings in the interest of preserving his movie career. Further research suggested, rather, that the real reason for his enigmatic personality might have been the very taciturn persona that I had found so appealing in my adolescence, and also the fact that he had a serious problem with the grog.

Indeed, when it came to those issues that are closest to my own heart, that is, opposition to any form of mind-control, such as McCarthyism, the House Un-American Activities Committee’s pursuit of independent thought, the Hollywood blacklist and censorship, Andrews was on the side of the angels.

Thus, when I compare him with another couple of fallen screen heroes of my early years, such as Robert Taylor and Barbara Stanwyck, he remains for me in a state of grace. Alongside those icons of integrity Bogie and Lauren Bacall. But, as for the likes of Adolphe Menjou, his performance in those years truly matched that of the degenerate French general he played so fastidiously in the 1957 World War I epic, The Paths of Glory.

When I logged off and put Wikipedia et al to bed for the evening, I felt pretty good. Not only was there the faintest possible resemblance to a hero of my mine since my teens, but that a closer examination of the totality of his life, revealed a man who had the depth to remain an icon of modest decency to those of us now in our 70s.

When you consider his background — a southerner from Mississippi, whose father was a Southern Baptist preacher and a supporter of the Ku Klux Klan — his life, however enigmatic, sets a pretty good example. I will be buying a copy of Hollywood Enigma: Dana Andrews, as soon as I can scratch the necessary together.

Was there someone you aspired to be like when you were young? What was it about them that made you feel like this?