‘Behave yourself: The seriously comedic antics of some over-60s I know’ 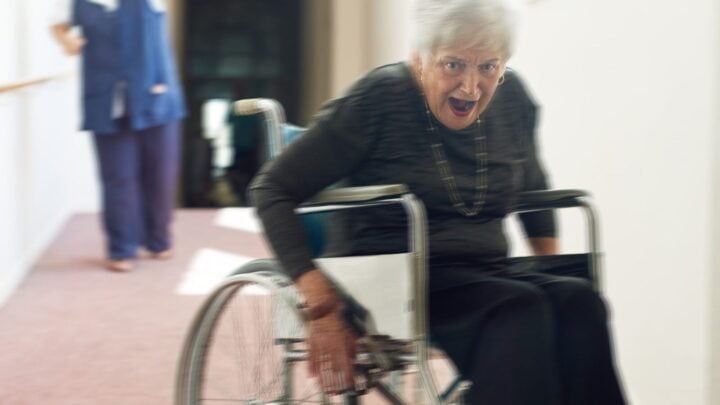 Catch me if you can! Source: Getty Images

“Behave yourself!” This was a comment of rebuke dished up to all of us at some stage. So we learned to be ‘good’. It is quite repressing and inhibitive, to be told to behave. None of us were game to ask, “Or what?”

Parents who administered this sage advice were also brought up repressed, as they meandered into the twilight years, some of them losing their inhibitions. One tale I heard of was about someone’s late-husband. He was in a nursing home due to his physical needs, still sharp as a tack. If he woke up grumpy, feeling like no shower, he would swear at the geriatric assistants, so he got away with no shower, lying in his grotty pyjamas and incontinence aids.

He was on a good wicket. He did not behave himself!

One wintry morning, this old timer swore at the wrong one. A genuine big-bosomed nurse spat the dummy.

“What did you call me? Excuse me, Mr S., I am not here to be abused by you or anyone else. Right, off with your pyjamas, down with the nappies, on with your modesty cape. On the commode, I’ll teach you to swear. I’ll give you three showers in a row!” So she did.

“Now behave yourself, or your family can place you somewhere else. Behave yourself!” So he did. Our nurses make the world a better place.

True story. My late mum also nearly got expelled from her nursing home.

She went downhill and punched the geriatric nurses. Much like a friend of mine, whose mother was relocated to three different nursing homes. She played up everywhere, and did not ‘behave’. Really, our mothers could not have had better daughters.

Here is another tale of a naughty geriatric. One lady friend of mine has an aged, frail old mother, nearly 90 years old. She does not like to take her fluid tablets. After one temperamental day, my friend phoned her local supportive medico, and had her geriatric parent placed in a respite centre at a nursing home.

Two weeks later, much subdued, her mother was allowed to come home, meekly taking her medications. The alternative was not preferred. My lady friend told her mother, “Now, behave yourself!” So she did.

What’s next? I know another pal’s father is in a nursing home. He has lost his inhibitions, and likes to grope the lady nurses. His family and the nurses tell him “Behave yourself!” Maybe he wants to relive his happy memories. Or is it that geldings make their own fun. I guess it does not matter if they are bald or grey on top, it is what they’ve got under the hood!

So, geriatrics, “Behave yourself!” (Or what?)

When was the last time you were told to behave yourself?