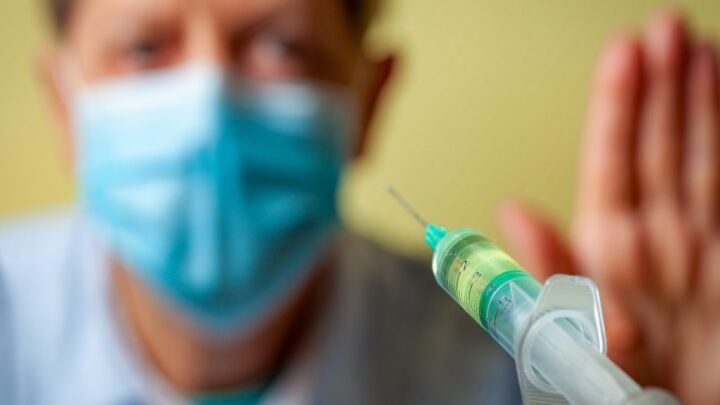 The unvaxxed employ all manner of weird arguments for their cause, the strongest being they don’t know what’s in the vaccine. Yet these same folk have never demanded to know what’s in the 11 secret herbs and spices in KFC chicken, wites David. Source: Getty Images

Pandemics were much simpler in the 1950s and ’60s. We just lined up at school and were mass vaccinated against something called polio.

Dad said polio was a real bad bugger and he fought Hitler in World War II, so he knew a bad bugger when he saw one.

We got injected with something we reckoned was made up of snakes and snails and puppy dog’s tails plus eye of newt and leg of toad, because this blend grossed out the girls. This was before we had TV so this qualified as entertainment.

Sadly, polio by the 1950s was one of the worst viruses sweeping the planet. It infected countless kids, paralysed thousands more and killed countless others. Hospitals had special iron lung machine units to keep polio victims alive.

A mass vaccination program wiped polio out, and I suspect one of the reasons polio was eliminated was because there were no social media or anti-vaccination influencers to tell us how evil this vaccine was and how it was a government conspiracy for mind control.

Those of us now in our 60s and 70s and beyond who survived polio and the various other deadly viruses and diseases so popular before today’s social media virus experts were born, shake our heads in disbelief at the anti-vaxxers doing their best to defy science and common sense while boosting their social media ‘likes’.

If all the anti-vaxxers were laid end to end we’d have a pretty solid and noisy border wall at Coolangatta to protect Queensland from the coronavirus pandemic ravaging germy parts of Australia right now.

Coping with the pandemic this past year and a bit has taught us much, such as how viruses spread and how vaccines work, but the most significant thing we’ve learned is that hairdressers and social media self-educated experts know more about vaccines than the scientists who created them.

Epidemiologists are the new darlings of the media, but sadly people who can’t even spell that word can shriek louder than a fame-deprived reality TV starlet are getting all the media headlines by fiercely opposing vaccinations.

Sadly the pandemic has strained tolerance and turned Aussies into factions — those who see the health and life saving benefits of vaccination versus the anti-vaxxers. Some oppose compulsory vaccination orders, but the most extreme claim vaccinations are a devious plan by Bill Gates to take control of their minds and force them to buy his preferred brands of underwear and 5G mobile phone services.

Unfortunately those with genuine health issues related to vaccinations have been drowned out in the debate by extremists who have hijacked the subject to push their wild conspiracy theories. Genuine health fears I can understand, deliberate anti-vaxx lies and misinformation campaigns only confirms there are way too many whackos on the loose now.

Anti-vaxxers is a polite, non-gender specific term for what folk born back in the middle of the last century would call whackos or loonies. The Who even sang about being a ‘head case’ but that was 1967 and pretty accurate for those times.

Today’s political correctness police constantly remind the Oldies generation that we can’t call people head cases any longer because the term will offend them. Apparently we’re not allowed to call them ‘snowflakes’ either. Who knew snow was offensive?

Since Covid-19 struck we’ve seen the anti-vaccination crowd try every known strategy to hide from the needle. “It’s just a flu …”, “Only old people die of Covid-19 and they’re going to die anyway…”, “The vaccine is a mind control device…” (says the people addicted to social media, mobile phones and Netflix), and so on.

For the record the oldies are unfazed by the Covid-19 pandemic. We survived the 1960s and afterwards. We’ve dealt with cheap cigarettes, lead paint, the Vietnam War and the breakup of the Beatles. We can handle a global plague.

Now we are amazed to see governments and retailers offering cash rewards to people to get vaccinated. In the 1950s saving your life was motivation enough, now it needs cash and a Chupa Chup for the snowflakes to take the jab.

The unvaxxed employ all manner of weird arguments for their cause, the strongest being they don’t know what’s in the vaccine. Yet these same folk have never demanded to know what’s in the 11 secret herbs and spices in KFC chicken so their anti-vaxx argument fails the test that comes with a large fries and a shake.

Perhaps the Wuhan institute of Germ Warfare from which the Covid-19 virus was unleashed … err … accidentally escaped … could officially confirm the vaccine to defeat their virus is made of snakes and snails, puppy dog’s tails plus some eye of newt and leg of toad. Gluten-free, of course.

What's your position on Covid-19 vaccination?