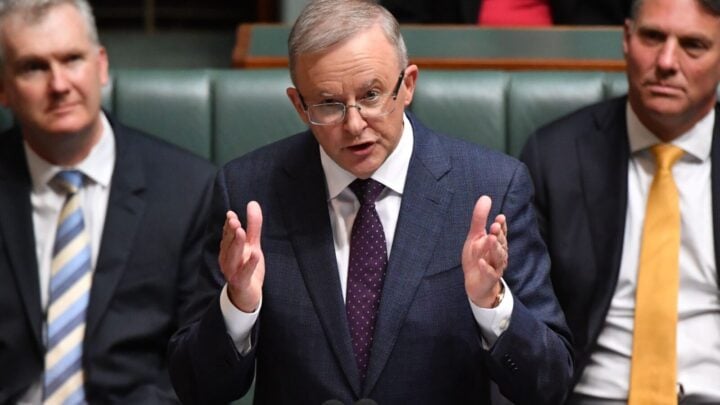 Anthony Albanese, delivering his budget reply in Parliament, failed to connect with all Australians according to Paul. Source: Getty Images

On Thursday, May 13, Labor Party leader, Anthony Albanese, had the opportunity to connect with all Australians when giving his reply to the 2021-22 budget delivered by the Morrison Government on May 11, which would have established himself and his party as the ones best suited to lead Australia after the next election. Sadly, at the end of the 30 minutes allocated for the reply, I felt Australia was left wanting, still waiting to hear Labor Party policy.

Half of Albanese’s reply confirmed Labor Party’s dislike of the Liberal Party and Liberal policy. However, it offered no alternative, it was boring to the point of embarrassment, and the Liberal Party will surely be laughing all the way to the next election in a year’s time.

Looking good with his ‘election mode’ personal make-over, Albanese, just did not get going. I feel the chance he had to cement his position within his party as the leader fit to take them to the next election has passed him by.

What did Albanese bring to the table? He went to great lengths to tell the Australian people of the failings within the Liberal Party’s budget, that in the opinion of the Labor Party, let down all Australians. He offered little in reply other than a public housing policy, more assistance for apprentices, concentration on jobs and more help for abuse victims. All subjects that have been trending for sometime. Certainly not sufficient to go to an election, in my opinion.

It has to be believed the Labor Party is keeping its policies hidden until closer to the election. One can only hope. The Labor Party suffered at the last election because it release too many polices to soon, something it will not do again. Of course hard liner Liberals would say they have no policies.

We now have another year of the Liberal Party riding their success having, for all their failings, protected Australia from the coronavirus pandemic. Notwithstanding problems with vaccine rollout, we are indeed in the best country at this stage and we all hope it remains so. The Liberal Party should be congratulated for its efforts, but more so the people and businesses for towing the line.

The gloves are off and we, the people of Australia, have a year of election campaigning in front off us. Everything political will be aimed at the end prize of four years in power, and the choices we have are limited.

People who have voted for the Liberal Party will continue to vote for the Liberal Party. Nothing will have them change. Those who have voted Labor all their lives will continue to do so. Elections nowadays depend on the floating vote of those who really have no political feelings, many who vote just to avoid the fine for not doing so. Minor political parties feed at the edges of the election pool and occasionally have success, often to their surprise. Many would say a vote for minor party is a wasted vote or a rebel vote.

The real problem is when an election fails to give an outright winner. Then deals are done with minor parties, which gives them a position way above their status.

Australia requires a stable, honest and powerful government from a political party who has the guts to make the hard decisions and not worry about the political consequences. We, the people, have to decide if we have any politicians capable of giving us the reassurance that they can do the job. That is a decision that each of us has to make.

The world has changed, if for no other reason than the coronavirus pandemic, and those changes will be with us for the foreseeable future. Fiscal policy has entered unknown territory that will by necessity change economic conditions.

It looks like an interesting year ahead for all of us. It is a shame that Anthony Albanese has failed to take the lead when his time arrived on May 13, 2021, something he may live to regret.

What do you look for in a political party - leadership or policy? Do you worry about who will lead Australia following the next election?