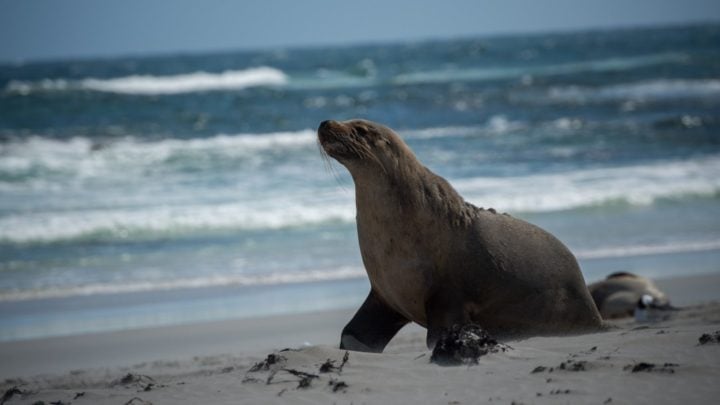 After the Christmas/New Year break, when school had returned, we felt that enough of the tourist crowd had departed and a long beach walk was in order. Our fur babies were keen to get their paws on the sand, knowing exactly where we were headed as soon as we entered the beach walkway. It’s amazing how much excitement can exude from three little dachshunds.

We arrived early to take advantage of the empty beach. We had been walking for some time when the dogs took an interest in a large suitcase someone had obviously left behind. My husband and I were somewhat frustrated to see it there. The suitcase was large and brown and looked like leather. The dogs were all over it, sniffing up and down.

Though my husband continued on the walk, the suitcase had me intrigued. I ventured closer to get a better look at it. I was also curious about what could be hidden inside, given how intensely the dogs were going at it.

When I was close enough, the suitcase got up and started barking. “Oof! Oof!”

Oh my goodness! It wasn’t a suitcase at all. It was a seal!

My brave dogs raced ahead to where my husband was and his behind his legs. My husband was laughing so hard. “That’ll teach you for being nosey,” he said.

I was a little scared. I could see the seal’s teeth and they looked bigger than my dogs’. I slowly started to walk backwards away from the seal, all the while keeping an eye on it. I’d never had such a close encounter with such an animal before and although it looked sweet and cute, I was unlikely to trust it. When the seal reared up from its lazy position, I could see that it had long whiskers and a somewhat yellow looking beard.

We gave the seal a wide berth and watched as it made its way back to the water. When I thought about it, it was also a relief to know that my dogs didn’t hurt it and it didn’t hurt the dogs during the brief encounter.

My husband still laughs when he recounts how the colour drained from my face the moment the seal moved. He takes great delight in sharing the story whenever he can.

Have you ever had a surprise animal encounter like this? Tell us about it.