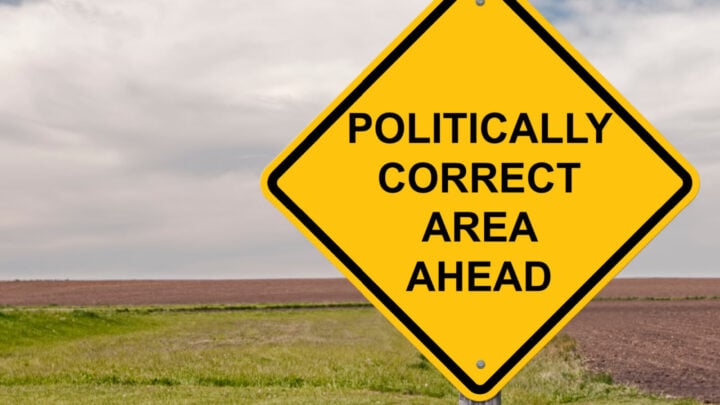 This blogger talks about his frustration with political correctness. Source: Getty

You would think that after more than six decades on this planet, nothing should really surprise the over 60s generation – and then someone invented political correctness.

Suddenly, we who are products of the 1950s (the era that gave us nuclear weapons, the bikini and Elvis) have to deal with a new threat to our society – people who refuse to call a spade a shovel but insist everything must be labelled in a non-threatening or discriminatory way.

Now, every day in the media we encounter examples of activist groups and academics trying to redefine the English language lest our traditional phrases or terms insult someone whose life ambition is to be offended by something.

Political correctness seems to be the art of not offending any person or thing while those who champion this concept of perfection create new levels of complexity to justify their insistence that our world must conform to only their definitions of it.

While society adapts daily to new definitions of gender, preferred pronouns and non-binary things, nobody really thinks of the over 60s generation and how difficult it can be for us to change a lifetime of conditioning to now (in our sunset years) have to re-learn the language we’ve grown old with.

Small wonder the oldies have little tolerance for the now constant demands that common everyday words be changed to something bland and particularly gender-neutral. We wonder, who are these people?

In the old days, we’d just smack them around the ears and tell them to go tidy their room, but as we now know, society is not that simple anymore. Bear in mind that in the 1950s our parents had survived the Great Depression and two world wars so they were not really in the mood to indulge.

The problem now, we are told by those born in recent times, is our outdated concepts of the modern world.

For the over 60s, life has become like tippy-toeing over eggshells lest we crack the psyche of some delicate soul who has devoted years of university study to graduate with a degree in Being Offended (with Honours).

Everything we say (or print) now is heavily vetted lest it causes offence to someone, yet while our society indulges the whims of the politically correct, those who shaped the world before them (our generation) are now regarded with the same irrelevance as old statues (which the touchy feely’s also dislike).

Attempts to rein in political correctness seem doomed to fail if some recent examples in the media are any indicator.

Back in the 50s, if I called my Mum ‘them’ or ‘they’, I would get a clip around the ear from my birthing parent. See how progressive we’ve become?

The University of Manchester is now instructing staff not to call over 60s people ‘elderly’ or ‘pensioner’ because the terms are ageist. Instead, academics insist our generation should be referred to as ‘mature individuals’ or ‘older people’.

I suppose it’s better than ‘old farts’ or ‘fogeys’, which is what we called that generation back in the day before we became they/them.

Apparently, various British universities and academic shelters have rolled out a new raft of  ‘inclusive language’ that also warns people not to use terms like ‘diabetic’ or ‘blind.’ Instead, they should say ‘person with diabetes’ or ‘people with visual impairments.’

Disabled car parks should now be known as accessible car parks and those with seizures should never be described as having ‘fits’, ‘spells’ or ‘attacks.’ So, can we still say someone is throwing a hissy fit? Some phrases deserve to be preserved at all costs.

The reason for all this craziness is apparently because some tender souls hearing certain words or phrases might be ‘triggered’ and feel ‘unsafe’.

It’s easy for us in Australia to dismiss this political correctness as symptomatic of the ills gripping Britain, but sadly, Australia is not immune either.

A private, all-boys school in Melbourne is under attack after college staff were encouraged not to use the terms ‘boys’ or ‘young men’ when describing the pupils. In search of a neutral language, the school wants suggestions for a gender-neutral term to describe its male students.

I suggest that whenever in doubt our academic institutions should always consult the ‘mature individuals’ generation, we who were raised to call a spade a shovel.

We can call on several decades of life experiences to strip away the academic pretensions and get to the core of today’s ills – always mindful that a clip around the ear may not still be the default fix for most problems, even if it was the go-to remedy in our youth.