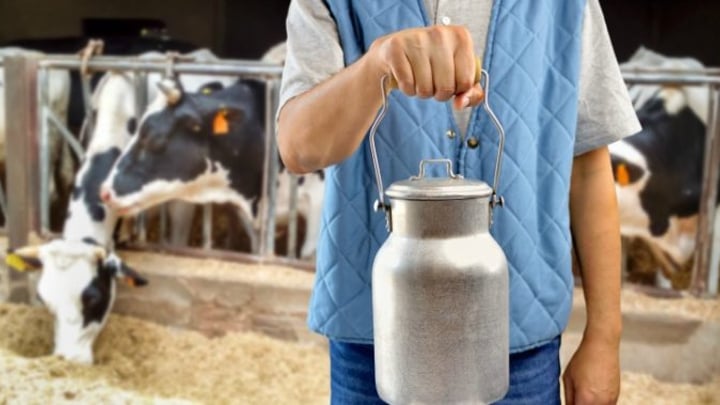 Woolworths and Coles have announced a 10 cent per litre levy on their own brand of 3L milk. Source: Getty

On Thursday morning both supermarkets announced a 10 cent per litre levy would be added to certain sizes of their own brand milk in a bid to assist those affected by the recent drought, which has seen farmers struggling to get by in recent months.

The price of a 3-litre carton of milk, which originally cost $3, will be increased to $3.30 with 100 per cent of the increase going to dairy farmers who for months have been scraping by to make ends meet.

Woolworths was the first of the two to share the good news, launching the fundraising campaign which will see prices increased throughout Queensland, New South Wales and Victoria, beginning mid-October.

Eager to support dairy farmers doing it tough, Woolworths Director of Fresh Food Paul Harker said this fundraising campaign will give customers the opportunity to help out.

“This new range of drought relief milk will provide customers with that choice, safe in the knowledge the extra money will flow through to dairy farmers in drought affected areas,” he said in a statement.

Woolworths will increase the price of some milk by $0.10 a litre to help struggling dairy farmers. 🥛

Will this really make a difference? pic.twitter.com/mfhIAshP21

The supermarket explained it will work with its own brand fresh milk suppliers who source milk from drought affected regions to setup the drought relief oversight committee, ensuring the extra 10 cents per litre paid to suppliers will be distributed to dairy farmers.

Understanding that this won’t solve the wider structural issues Harker said: “The move is about easing some of the immediate pressure brought on by the drought, while government and industry work through the long-term reform agenda needed to ensure future generations of dairy farmers can prosper.”

Following in Woolworths’ footsteps, Coles later confirmed it too would add a 10 cent per litre levy, with prices increasing from Thursday until the end of the year.

The decision adds to the supermarket’s ongoing support of Aussie dairy farmers with Coles and its customers already committing almost $12 million to drought relief, including $5 million from the Coles Nurture Fund.

“Coles has always supported our Aussie farmers. We have an Australia First Sourcing Policy and all of our fresh milk is 100 per cent Australian,” a Coles spokesperson said. “Coles for a number of year has sold a range of milk brands with a percentage of sales going to support dairy famers in Victoria, South Australia and Western Australia.”

The major announcement follows an emotional plea from one drought affected farmer to the supermarket giants, who just weeks ago took to social media, calling for a permanent end to the “constant battle” they say is caused by unfair milk pricing.

Writing on the Facebook page for Tommerup’s Dairy Farm, in Kerry, QLD, the dairy farmer pleaded with customers to sign a petition aimed at pressuring supermarkets to increase prices by 10 centre per litre, which would go directly into the pockets of struggling farmers.

“It seems a constant battle to think outside the square and come up with something new to add value to our milk. We’re certainly not alone in feeling like this and we know so many who no longer have the energy to continue the battle.”

What are your thoughts on the levy? Will you be paying the extra money to support dairy farmers?