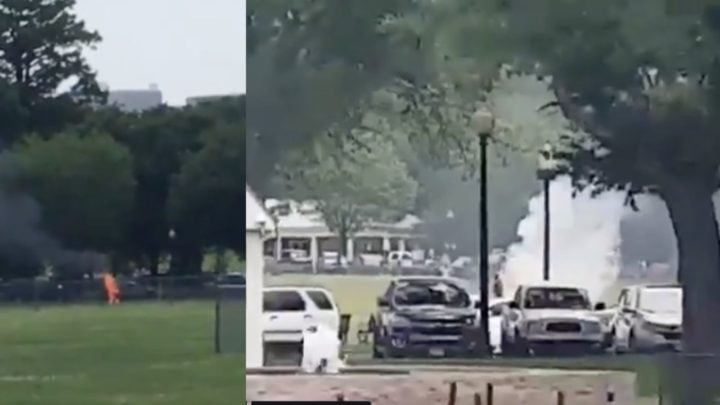 Secret Service officials responded to an incident at the White House on Wednesday afternoon (local time) after a man set himself on fire on the lawn of the President’s official residence.

Details are still emerging about the man involved, however the unidentified male was caught on video walking calmly across the grass in front of the iconic Washington DC building before police arrived and frantically attempted to douse the flames.

Local police, the National Park Service and Secret Service officers attended the scene and administered first aid to the man, who was found walking across the Ellipse, an area popular with tourists.

The Secret Service confirmed the incident, writing on Twitter: “At approximately 12:20 p.m. a man lit himself on fire on the Ellipse near 15th and Constitution Ave., Secret Service personnel are on scene assisting @NatParkService and @usparkpolicepio in rendering first aid.”

At approximately 12:20 p.m. a man lit himself on fire on the Ellipse near 15th and Constitution Ave., Secret Service personnel are on scene assisting @NatlParkService and @usparkpolicepio in rendering first aid.

Shocking footage and images of the incident, which took place around noon on Wednesday (approx. 2.20am AEST) emerged online as people shared their concerns on social media.

“The saddest thing I’ve ever seen,” one person wrote. “A person set themselves on fire in the park at the south lawn of the Whitehouse. Please pray for their soul.”

Another said: “According to my daughter … she just saw a person that was on fire running across the White House lawn. Police and rescue have responded. They’re closing all surrounding streets right now.”

While a third wrote: “Why the hell would anyone do this. Insanity!”

Video of the man who set himself on fire today outside the White Househttps://t.co/AHRXMDvxhd

The White House are yet to release an official statement on the incident, however President Donald Trump and his wife First Lady Melania Trump had arrived back in the US capital on Tuesday after spending several days in Japan.

President Trump has also not yet tweeted about the shocking incident and it is not known whether the First family were home at the time.