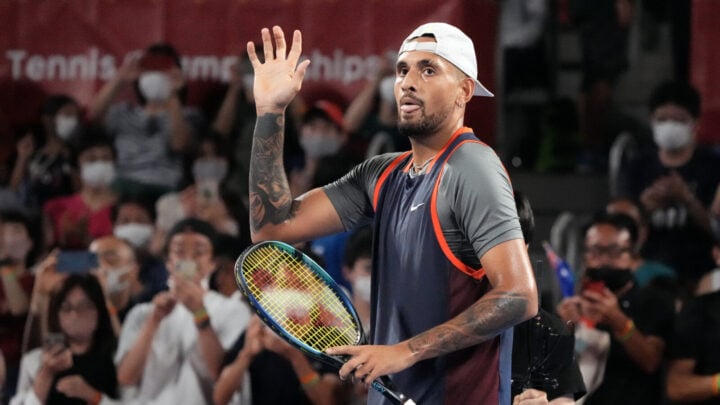 Kyrgios’ bombshell announcement received a mixed bag of responses from sporting fans who took to social media to share their thoughts on the news. Source: Getty Images.

Australian tennis star Nick Kyrgios has cast doubt on his future with the sport yet again after announcing he would step away from the court under one condition.

While speaking with reporters at the World Tennis League exhibition event in Dubai, the topic of what Kyrgios had planned for 2023 came up.

“Hopefully, I can win a slam and just retire,” Kyrgios revealed.

“Would I sign again? Honestly, I don’t know about it.

“It took a lot of hard work this (2022) season, a lot of discipline and it seems the better you do, everyone wants a bit more of you and it becomes more stressful.

“But I had a lot of fun this season. And I’m finally just proud to say I made a slam final and started to meet some expectations.”

Kyrgios was certainly able to meet expectations during his 2022 season, not only did he take home victory in the men’s doubles alongside Thanasi Kokkinakis at the Australian Open this year but he also made it to the Wimbledon finals before losing to Novak Djokovic in a gruelling four set match.

Kyrgios added that he “enjoyed” his latest season, admitting that he “definitely felt better off and on the court”.

Kyrgios’ bombshell announcement received a mixed bag of responses from sporting fans who took to social media to share their thoughts on the news, with some offering their support for Kyrgios in his grand slam bid while others questioned the sincerity of his announcement.

Honestly – it’s a real plan and possible. He has a reasonable shot at another Wimbledon final and if he wins – let him retire and do his thing.

Doesn’t sound like a player who wants to play competitive tennis, and thus a player who’s not gonna perform at his best level.

Don’t retire Nick….I’m rooting for you. You and K made doubles fun to watch.

He’s been saying the same thing for years. Not having a laugh at all

He has the potential. He just have to get that right mindset and he is up for that.

I would love that for him! Us or Wimbledon.
The other 2 i want rafa and novak

It’s certainly not the first time the sporting star has hinted that he may be stepping away from the sport of tennis, following his impressive performance during this year’s US Open the World No. 22 sent rumours flying after hinting that he would only play a few more matches.

Will @NickKyrgios consider retirement if he wins the #USOpen? pic.twitter.com/kfQusAm0GN

After defeating Daniil Medvedev, in what sports commentators called the “best match of his career”, the 27-year-old announced to media outlets there would potentially be “three more matches” before he would “never have to play tennis again”.

“It’s the last biggest tournament of the year,” he said.

“We got to try and just tough it out and keep pushing each other, keep being positive. We do realise it’s next week we’re going home. But three more matches potentially, then we never have to play tennis again.

“It’s a great win. But I come off the court and I’m just almost relieved that it’s over because there’s just so much pressure every time I go out on the court, so much expectation, so much unpredictability of what I can do.”

Later in the year, Kyrgios got tennis fans and the sporting community talking after hinting yet again that he may be hanging up his racquet and stepping away from the tennis court.

Kyrgios hinted at a possible early retirement during a recent question and answer live stream on social media.