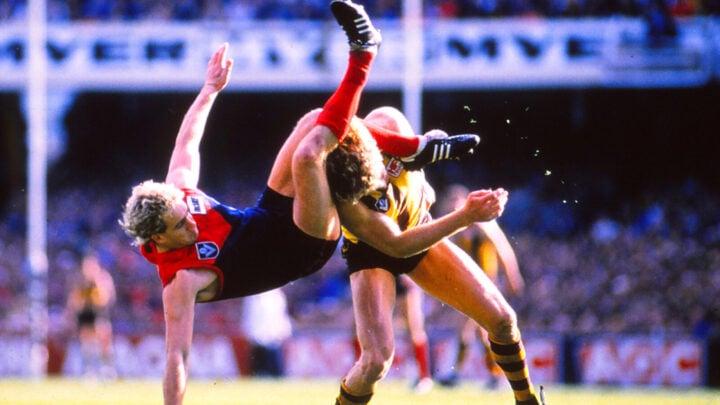 In a number of firsts, the AFL’s 2022 Grand Final clash on Saturday, September 24, for the AFL premiership cup will be the first time Geelong Football Club and Sydney Swans have met in a Grand Final, despite both teams being incredibly successful.

This weekend’s showdown will also see the longest gap of two players meeting on the field close as Geelong’s Joel Selwood and the Swan’s Lance “Buddy” Franklin go head to head for the trophy.

The pair haven’t faced off since the 2008 Geelong-Hawthorn Grand Final at the MCG and will be the two oldest players on the field.

As millions of Australians are preparing themselves in anticipation of what will surely be a cat-and-mouse battle between two founding clubs of the Victorian Football League, Starts at 60 have compiled a list of the top moments to go down in AFL’s Grand Final history.

The nail-biting 144-138 clash between the Hawks and Geelong kicked off with an intense start, with Brereton at the heart of it.

At the first bounce, Brereton was blind-sided by Geelong’s Mark Yeates, enduring agonizing injuries of two broken ribs and a ruptured kidney.

Only minutes later, the Hawks legend was up and running, kicking an incredible goal that would set the tone for his team’s championship.

Dermott Brereton broke two ribs and bruised his kidney in the opening minutes of the ’89 Hawthorn v Geelong Grand Final. Not only did he continue to play, he even kicked three goals in the six-point thriller ????????

In the Grand Final against St Kilda, there’s no doubt Adelaide Crow’s player Darren Jarman was a crucial player in the Crow’s 125-94 win.

Named as one of the best of the match, Jarman secured his team a memorable five goals in the last quarter.

Jarman’s final goal will see his name go down in history, as he stood at an off angle 35 metres away from the posts, the nonchalant kick put the Crows 31 points ahead.

In an edge-of-the-seat game and raucous crowd, Collingwood was in a 24-point lead before St Kilda’s Lenny Hayes evened the playing field in the 29th minute of the final quarter.

The scenes that followed left the crowd in utter disbelief as the bell rang out and each team’s frantic efforts to secure the ball failed, leaving a score of 68 all.

The 2016 Grand Final saw the Western Bulldogs secure their first (and last so far) premiership win since 1954 – when it was a battle for the flag.

Tom Boyd squared up to a jaw-dropping, long kick from inside the centre square, securing the Grand Final for his team.

Boyd celebrated the goal with the elated crowd as he threw his hands into the air to feel the excitement.

As the clock ticked on in the cliff-hanging battle between the West Coast Eagles and Collingwood, Eagles player Dom Sheed stole the lead for his team in with one extraordinary kick.

Standing 40 metres out, Sheed put everything on the line in the final 112 seconds of the game – and it certainly paid off.

The Eagles took home the AFL premiership cup with a score of 79 – 74.

Last, but not least, one of the most thriving clubs, the Brisbane Lions, made AFL history when appearing in four consecutive premierships from 2001-2004.

Winning three of the Grand Finals, the Lions 3-Peat is one to remember.

With the long history of monumental moments in AFL Grand Final history, the 2022 AFL premiership will surely be one not to miss.