‘This is embarrassing’: AFL stunt to bring MCG grass to Gabba slammed 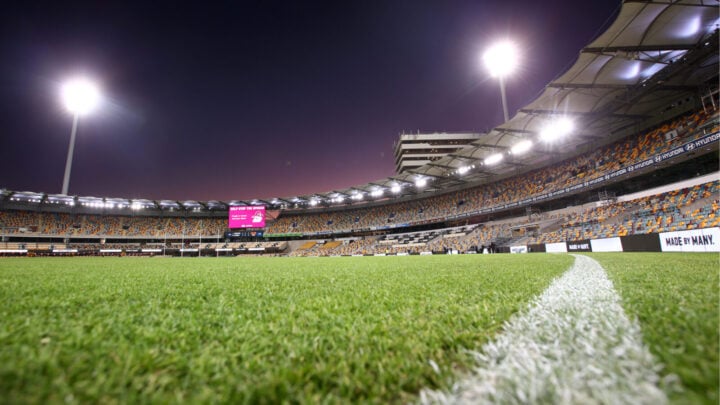 Richmond will take on Geelong at the Gabba tomorrow. Source: Getty.

Footie fans across the country are eagerly awaiting this Saturday’s Grand Final match, but the AFL has come under heavy criticism today after a stunt to bring a piece of the MCG to Brisbane left people uninspired.

Game sponsor Rebel Sport made the decision to relocate a piece of the hallowed turf from Melbourne’s MCG to the Gabba ahead of Saturday night’s game, as a nod to the traditional home of the country’s major sporting event – which has been held in the Victorian capital every year since the competition began 123 years ago.

An image of the finished product was shared on social media on Friday, showing a 3m-by-1m rectangle of turf that had been added to the side of the pitch at Brisbane’s iconic ground, having been transported more than 1,700 kilometres by car, despite Covid-related border closures.

But many Aussies have been left scratching their heads and wondering why time and money was spent on the uninspiring stunt, with people taking to social media to express their confusion and, in some cases, frustration.

“Honestly what the hell is Victoria doing! This is embarrassing,” one person wrote. Another commented: “Totally worth it and not a complete waste of time and money at all.”

One user said: “Is there anything more cringe worthy in the history of time than this?” While another wrote: “Absolute joke cant go interstate to see family but can transport a bit of grass across country for no reason well done Australia.”

Some people also made light of the situation, with one person writing: “I heard when they unrolled it 10 Victorians jumped out and made a run for it!” Another wrote: “Nice to see that in these COVID times the AFL and their sponsors think it’s appropriate to be spending money on shipping MCG turf up to the GABBA.”

However some people thought the strip of relocated turf posed a health hazard to players, with one saying: “It’s too close to the boundary. Risk of injury. Should have put it directly where the players run out. ‘And the players run out onto the MCG surface’ then get on with the game.”

Richmond will take on Geelong at the Gabba at 6.30pm AEST on Saturday, October 24.

What do you think of the stunt?