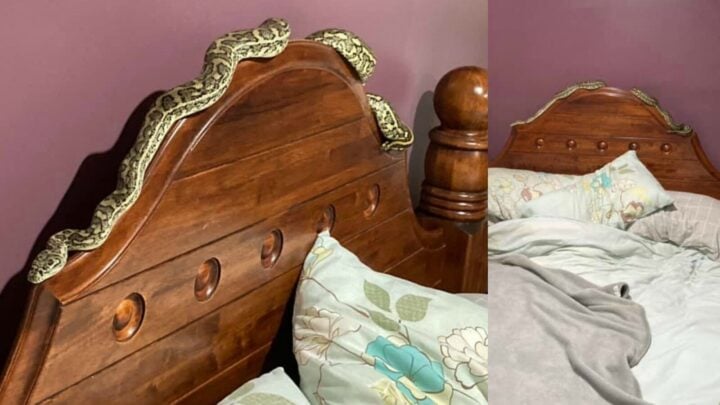 A Queenslander got the fright of their life when they found a massive snake lying over their bed. Source: Facebook/ Snake Catchers Brisbane, Ipswich, Logan and Gold Coast

When you go to bed at night you’re generally feeling relaxed, calm and ready for a nice relaxing sleep, but that’s the last thing that happened for one Aussie recently when they discovered a massive snake lying right over where they would rest their head.

Snake catchers were called to the Queensland property earlier this month to find the python sprawled along the bed head, ready for a restful night’s sleep. But, unfortunately for the reptile — that slumber was interrupted and it was instead transported elsewhere to sleep for the night. Certainly a massive relief for the homeowners!

In photos shared on Snake Catchers Brisbane, Ipswich, Logan and Gold Coast the snake could be seen stretched right over the bed head without any care in the world about whose bed they had taken over. The post has received much attention from fellow Aussies since them, most of whom admitted they’d have nightmares after finding a snake in their room.

“That’s enough to give me nightmares for the rest of my life!” Fiona Shammall wrote on the post on Facebook.

“Nice decoration but I think I’ll sleep somewhere else,” Jacqui Crawford said. While Ami Varney added: “He just wants to cuddle – it’s cold outside.” And Donna Hallam joked: “They should sleep well tonight.”

Even though it’s still winter in Australia it hasn’t driven the snakes away – at least not in the Sunshine State. And there’s still been several sightings over the past few months of snakes in homes and backyards. In fact, one Queensland driver even had a very close encounter with a snake while he was driving.

The man was confronted with the unexpected danger as he cruised along the Dawson Highway, west of Calliope, back in June, after a deadly eastern brown snake began to wrap itself around him. The tradie, identified only as ‘Jimmy’, used a work knife and his seat belt to kill the snake – which is highly venomous and one of the most dangerous in the world – acting out of fear for his own life.

The 27-year-old, from Gladstone, was travelling along the rural highway at 100 kilometres per hour at around 5pm on June 15 when he realised he was no longer alone in the car. But as he tried to press the brake and bring his ute to a stop, the snake began striking at the seat between his legs.

Jimmy was left with no choice but to kill the snake, despite the animals being protected under the Nature Conservation Act 1992, and was making his way to the hospital when he was pulled over by Queensland Police for speeding, believing he’d been bitten by the deadly reptile.

QPS released footage of the moment they pulled Jimmy over, having clocked him driving at speeds of more than 120km/h. However the officer was given an unlikely story when he approached the clearly panicked driver.

“I’m driving along at 100, and I just started to brake,” Jimmy could be heard telling the officer in the chest-cam footage. “…And the more I moved my legs… it just started to wrap around me. Its head just started striking at the (driver’s seat) chair, between my legs.”

Paramedics attended the scene and it was determined that Jimmy had not actually been bitten by the snake but was suffering shock from the ordeal.

“It was pretty terrifying, I’ve never been so happy to see red and blue lights,” Jimmy said.

Have you ever discovered a snake in your home? How did you react?