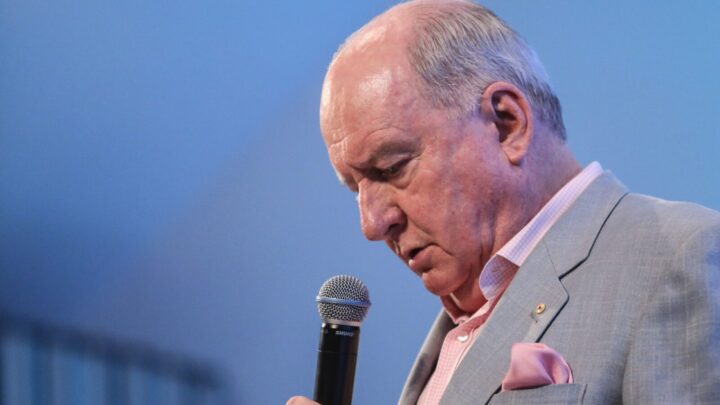 End of the road for Alan Jones and Sky News. Source: Getty

Broadcast legend Alan Jones has taken to Facebook in a lengthy backlash after being “forced out” of his prime-time 8pm evening slot on Sky News Australia. Jones’ last broadcast for Sky will be tonight (Thursday, November 4) after the 24-hour news network declined to renew his contract.

Never one to take things lying down, the 80-year-old news veteran immediately hit back with an extended statement on his personal social media. In the broadside, Jones argues that he has been unfairly held accountable for “bad ratings”, which he described as an “erratic beast”.

He defends himself by citing his own robust social media following (Jones has 156K Facebook followers), which he says outstrips that of other Sky hosts. He also claims that Sky had stopped posting his content on social media for fear of being “cancelled” over his conservative views.

“My point is, the total who go to the Alan Jones opinion area is, pleasingly, greater than the aggregate of all other Sky News hosts,” wrote Jones.

“In recent times my material hasn’t been widely published on these sites as the company has felt under threat from being cancelled.”

“I am only offering all of this because, for most of my professional life, I have never defended myself against criticisms of my performance. I merely let the figures speak for themselves, as they did in radio and, as I think you can see from above, they have, in my brief stint on television.”

The outspoken anchor only joined Sky in July 2020, after leaving his lengthy radio career with 2GB, citing health reasons. At the time, Sky News Australia CEO Paul Whittaker said: “With a connection to his audience like no other, we are delighted Alan joins Sky News Australia exclusively as anchor of new weeknight primetime program Alan Jones, the only place to watch and listen to Australia’s most successful broadcaster.”

Jones was offered an alternate role at News Corp, on their fledgling streaming service Flash, but turned it down.

A firm fixture on the Australian media landscape since joining Sydney radio station 2UE in 1985, Jones is no stranger to controversy and has been embroiled in many on-air tirades with his high-profile guests over the years. In 2021, he had to apologise to then PM Julia Gillard for saying that her father John had “died of shame” at a Young Liberals function. He also recommended that Gillard be “put in a chaff bag” and thrown in the ocean.

Jones’ column for The Daily Telegraph was pulled last year over his inflammatory views on Covid-19. Then there was his Cash for Comment episode when he was forced to disclose personal payments taken for unscripted promotion of products on-air.

“Pack your desk up into a chaff bag, and bugger off,” one post read.

Pack your desk up into a chaff bag, and bugger off. #AlanJones pic.twitter.com/4Ldd07jLEL

“One less slug on the station. Let’s hope he fades away into oblivion,” said another.

One less slug on the station.

Lets hope he fades away into oblivion. #Auspol

One wag wrote: “Any truth in rumour that Greta Thunberg will be taking over #AlanJones 8pm time slot on Sky News Australia?”

Another labelled Jones “a toxic smear on Australian media” and said that nobody was interested “in his idiotic rants anymore”.

#AlanJones has been nothing but a toxic smear on Australian media. At last SkyNews is dumping him, but only because nobody is interested in his idiotic rants anymore.

Some Jones’ loyalists however called for a petition to re-instate their fallen idol, warning Sky that a ratings drop would surely follow.

#AlanJones #sky Rumours of Alan Jones leaving Sky News at the end of November. If it’s true then ratings will drop. A petition to get him to stay is needed. pic.twitter.com/pSpymhUrwk