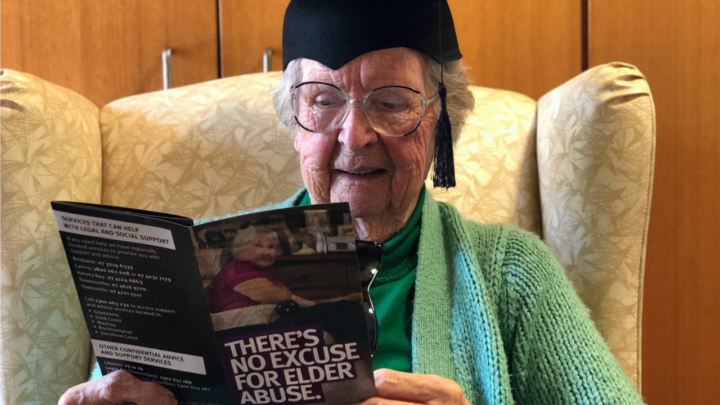 Margarita Solis has bravely opened up about her assault. Source: opalinstitute.org (Supplied).

A 96-year-old woman who was sexually assaulted in her retirement village just two years ago has bravely spoken out as part of a new International Women’s Day campaign to back older female victims, insisting: “We deserve to be respected.”

Margarita Solis first waived her right to anonymity last year to reveal her horrific ordeal, after being assaulted by a 69-year-old temporary on-site manager in a privately owned independent living community in Brisbane.

Now she has worked with the Opal Institute, which helps promote the sexual rights of older people, on a new campaign called #SheToo which aims to raise awareness of the importance of listening to older women.

Speaking exclusively to Starts at 60, Solis said she hopes the campaign will inspire other older women to find the courage to speak out and seek justice.

“My message to other women is: It’s not your fault. Go ahead and stand on your dignity and say: He is not going to get away with doing this to me. Most of us are mothers, grandmothers, aunts and we deserve to be respected,” she said.

The #SheToo campaign was inspired by the worldwide #MeToo movement against sexual assault, but aims to raise awareness of the restrictions many older women face that make reporting abuse harder to do – from a lack of social media knowledge and access, to diminishing speech and cognitive abilities.

Solis had initially moved into the retirement village after losing her husband Mick, while her only child, a 70-year-old son, was suffering from Alzheimer’s. According to a report in The Weekend Australian Magazine last year, she lived there for five years before the temporary on-site manager was brought in to replace the long-time managers while they went on holiday.

The man reportedly forced his way into her home before attacking her. Shockingly, she was very nearly not believed when she attempted to report the attack. But Solis continued to tell her story and pursued her attacker to court, where he eventually pleaded guilty to two charges of sexual assault – one on Solis and one on another resident – but was given just a six-month suspended sentence with a two-year good-behaviour condition.

“I wasn’t listened to – I wasn’t believed by the manager of the place where I was living and was assaulted,” she added to Starts at 60. “They told me he wouldn’t do that because he was a friend of theirs. They said I must have had a urinary tract infection. They thought I was making trouble. I was also advised by my very good friend not to say anything because people would talk.”

It was not until she spoke to the manager of a seniors club that she attended weekly that she was taken seriously. The manager reported the assault to police, and the case went to court.

“The police do believe you until proven otherwise – that’s a good way to go. You have to listen to older women first,” she added.

Solis, who is now living happily in a new aged care facility in Brisbane, previously told The Weekend Australian Magazine that she thought her attacker targeted her because she was an easy victim. But the British-born woman, who was a nurse for six years during World War II, said she was no soft touch.

Sadly, the news outlet’s report also made clear that Solis is far from alone in being an older female victim of sexual assault.

A study found that there were almost 400 reports of unlawful sexual contact, including some involving force, against women aged 60-plus in the year to June 2014. And Di Macleod, a director of the Gold Coast Centre Against Sexual Violence told the news outlet that such cases were not at all rare, but that in the same way that society previously didn’t want to believe that children could be sexually abused, there is a similar societal blindness to sexual abuse on elderly people.

As part of her new campaign, Solis has now offered a series of guidelines and advice on how to listen to older women. The Opal Institute has also set up a survey on strategies for listening, and to inform submissions to the Royal Commission into Aged Care, which can be found on the site.

The government’s My Aged Care site offers contact details for anyone concerned about any form of elder abuse.

Margarita Solis will be speaking at Rock the Boat, the 2019 National Elder Abuse Conference, that will be held July 22-23 at the Brisbane Convention and Exhibition Centre. You can learn more about the conference at neac2019.com.au.

Do you know anyone who has gone through something like this? Do you think more needs to be done to ensure older women are listened to?