Sassy at seventy: The ‘unconditional love’ of pets 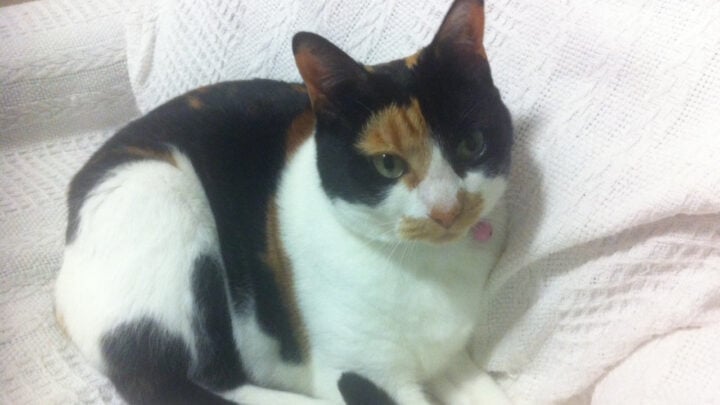 When my daughter was fifteen I had a Jack and the Beanstalk mother moment. No, not a “Wow! Look at that golden goose egg” moment, but a “You went to the market to get fruit and veg and you came back with a scrawny, ugly, flea-ridden kitten!” moment.

And so Scruffy entered our lives.

My family had always been dog owners, and even when I married we were rarely without a dog sharing our lives. Suddenly, after twenty-five years of human and canine parenting, we were thrust into the feline world.

The kid who’d pushed Scruffy onto our daughter said if he couldn’t give all the kittens away they were going to be euthanised. Emotional blackmail at its best. After washing and de-pesting this little escapee from certain death, we discovered she wasn’t so ugly after all. And she decided we were a better proposition than her previous home. She was happy to co-habit with our dog, and happier still to take up guarding my computer keyboard, preferably by lying on it.

Unfortunately, animal life spans are short, and Scruffy’s death broke my heart. Like many before me, I swore that was our last pet (just like I did when our dog, Lucky, crossed the rainbow bridge).

But animals have a way of finding their owners, and our second-eldest son soon brought home a puppy from the RSPCA and named it Bourbon. “He won’t be a big dog,” he said naively. I pointed to paws that would need a Great Dane to grow into them and said, “Think again.”

Bourbon, or Boo as he was nicknamed, almost grew into his paws, and as he matured it became obvious he should have been named Houdini. He had a severe case of wanderlust, and our fenced-in backyard wasn’t going to stop him from exploring the wider world, even though we raised the fences to what we thought were impossible heights. Time after time we watched to see how he made his escape, but we needed our sleep and he, black with a splash of white under his neck, was a phantom of the night.

Early in his life, Boo had shown retriever traits, including the ‘stand rigid, tail out straight, point with a front leg, show them where the prey is’ one. During his night-time forays, he proved this was indeed his heritage. It started off with small things – a mango, an avocado, a half-eaten cheese sandwich still in plastic wrap, but then progressed to the remnants of a pork roast, and finally a plastic bag of fresh bread rolls. He was a well-fed dog, so it seemed the ‘gifts’ were for us as he never attempted to eat them.

We only learned how he managed to scale our high fences when we were woken one night by his piteous howls. He’d obviously learned how to climb but had misjudged his return and his front paw had caught and he was hanging by it. The broken paw slowed him down a lot and as he matured he seemed content with walks with us rather than midnight meanderings.

During this time, a cat that lived in one of the flats next door showed a desire to move in with us. Zara, a calico cat, shared the flat with two adults, three teenagers, a baby, a dog, and a grown kitten from her previous litter. I could understand her desire for a little more space.

When we returned from holidays one year, we found Zara had given birth to two male ginger kittens and two female black and white kittens. When the kittens were old enough we offered to take one. We took the males for a couple of hours to see how we liked them. One hour later we gave them back and chose one of the females. As I said to a friend, “The males were trouble and strife,” to which she replied, “Then the female should be Mayhem.” And so she was named.

Months later we also acquired Zara when the tenants did a flit and left her behind. Bourbon, Zara and Mayhem happily tolerated each other until their deaths many years later. By that time, we had moved from town to a small coastal suburb, a friendly area where everyone walked their dogs and chatted to strangers.

Again, I had decided that we would have no more pets. Their passing caused too much grief. My daughter knew better. She persuaded my husband that what I needed for my birthday was a rescue cat named Squeek, who had been owned for five years by a woman who wanted her to be an indoor cat like her other one. Squeek apparently thought otherwise. Exasperated by Squeek’s frequent attempts to run out any opened door, the woman surrendered her.

It was love at first sight for me and my husband. Another calico, but with predominately dark colours on her back and white under her belly, she had big pale green eyes that my eldest grandson called ‘avocado eyes’. In her first hour inside the house, she jumped onto my office bench and gazed longingly through the window at the garden. I fashioned a harness and we led her outside. It was a joy to see how she tentatively picked her way through the plants, sniffed the flowers, and tested that unknown green stuff, grass.

Squeek proved to be the most social cat I’ve ever come across. She would run to the front door or the driveway to greet visitors, escort them to the patio, follow them around the garden, smooch around their legs, and sit next to them. She loved sleeping on my lap or my husband’s lap when we watched television.

Two years ago I brought my husband home from the hospital for the last time. On his last day with us, after the palliative care doctor increased his morphine, Squeek settled on his lap and didn’t move, even after he died twelve hours later. She was determined not to leave him, but, like me, had to finally accept the inevitable.

She is a wonderful companion, though becoming a little bossy in her middle age. Like my t-shirt says, “Dogs have masters, cats have staff”. But I’m inclined to think that our pets were put on earth to give us that most precious gift – unconditional love.