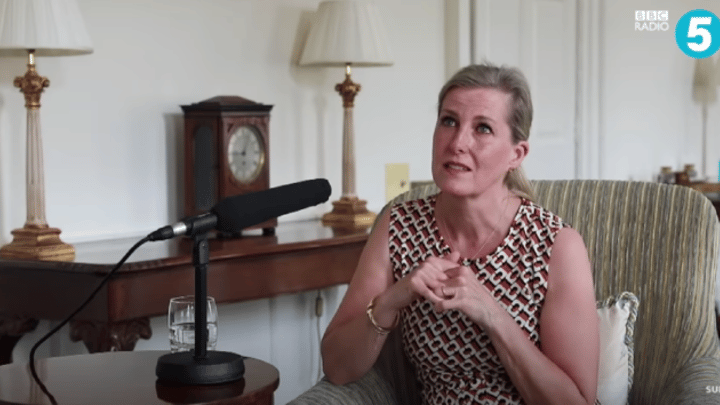 Like many of us, Sophie Wessex knows too well the pain of losing a parent. Source: Youtube/BBC

An emotional Sophie Wessex, 56, has broken down in a tear-filled interview recalling the pain she felt over the loss of her mother and her father-in-law, Prince Philip.

The countess, who is the wife of the Queen’s youngest son Prince Edward, spoke candidly about her grief during a live BBC Radio 5 interview on Wednesday, describing the moments in the years following her mother’s death where a sudden memory would leave her crumbling “at the knees”.

“But just talking to you now, it’s a bit of an ‘Oh my goodness’ moment, which you don’t necessarily expect, and you don’t expect them to come,” she said. “And I had the same when I lost my mother. You know, I’d be fine, absolutely fine, fine, fine.

“And then something happened, or you’d hear a piece of music, or you’d do something, and suddenly you would, you know, get taken off at the knees. So, there’ll be lots of moments like that. But it’s good to remember.”

During the interview, Sophie held back tears as she spoke about the famous photograph she snapped of the Queen and Philip in Scotland in 2003. The photo was taken on top of the Coyles of Muick near the royals’ estate in Balmoral, and was only released by the Monarch after Prince Philip died.

“We were lucky enough to go to Scotland for half-term, and I don’t know if you remember the photograph that I took,” she said, pausing to collect herself, her voice cracking as she fought back tears.

“Just to be there, in that place, was an ‘Oh my God’ moment. Um, so I think they’ll come and go, but you have to let them come, and let them go.”

Sophie said the Duke of Edinburgh’s passing had left a “giant-sized hole” in the royal family’s life, adding that the coronavirus pandemic had made the grieving process much harder and the absence of normality meant that the immediate loss wasn’t always felt the same way.

“I think unfortunately the pandemic has slightly skewed things, inasmuch as it’s hard to spend as much time with the Queen as we would like to,” she said. “We’ve been trying to, but of course it’s still not that easy. I think the whole grieving process is probably likely for us to take a lot longer.

“Of course, the normal way of things isn’t normal yet, so we’re not necessarily doing the things that we would normally have done with him. It may be the same for many other families out there. Because if you’re not living with somebody, 24/7, the immediate loss isn’t necessarily felt in the same way, as if somebody was in the house with you all the time.

“So if they were normally at a slight distance, living down the road, whether it be 15 minutes, or 1,500 miles, it’s only when you would do the normal things that you would have done with them, and you suddenly realize that they are not there, that you really start to have an ‘Oh my goodness’ moment.”

In the interview, Sophie also admitted to having the “odd wobble” during lockdown, saying it was popular TV show Line of Duty which helped her get through “one day at a time”.

“I just couldn’t see an end to it – I couldn’t visualise how this was all going to pan out,” she said. “Life, all the normal things that we could do, had just … it was like sand through your hands – we all got very good at managing disappointment.

“Every time there is a new variant, we just have to hold our breath and hope that the vaccines are good enough to stand up against them.

“So, how am I? Like everybody else I suppose: just taking one day at a time.”

Do you still have something that reminds you of your lost loved one?