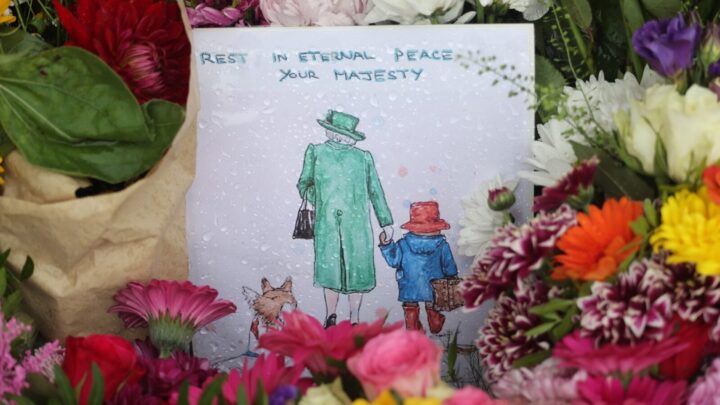 Thousands of people have been leaving heartfelt tributes to the Queen following her passing away. Source: Getty

Following the announcement of Queen Elizabeth II’s death on September 8, thousands of people have been trying to cope with the loss of their beloved Queen.

A sea of tributes, gifts, flowers, and notes have been left out on the gates of Windsor Castle, however, one note has stood out after it deeply resonated with mourners.

A note written by royal reporter Rick Petrachi went viral after many people claimed it “sums up” the current feelings of a grieving public.

I’ve spent the past 3 days in denial and then today found the courage to go and leave my tribute to the great woman The Queen was. It hurts so bad but I find comfort that you found your peace. May you rest in piece, Ma’am. I can now say: God Save The King! #TheQueen pic.twitter.com/Qp55ngKf9c

“It hurts, ma’am. It hurts so bad. We’re not ready to bid you farewell,” the note begins.

“You have taught us everything except how to live in your absence.

“A Britain without its platinum Queen is unimaginable.

“After all, like Philip to you, you were our strength and stay.”

Petrachi closed out the touching note by claiming the Monarch will remain “forever in our hearts”.

The note which had been shared on Twitter pulled on the heartstrings of other royal fans, who left their own thoughts in response to the sweet message.

“Oh wow you made me cry such touching words, you truly captured everyone’s feelings,” one person wrote.

“What a beautiful note that says how we feel … today is the first day I’ve not been reduced to tears … until I read your note to our #ElizabethTheGreat.”

“Your words are beautiful Richard and I think everyone, simply everyone, 100% agrees with the heartfelt feelings you have expressed.”

“I Loved it….I thought she would live forever…she was my HERO.”

Upon the arrival of her coffin at Buckingham Palace from Edinburgh, tributes to the Queen continue to flow across the UK.

Hundreds of thousands of people have already begun lining up outside the Palace all patiently waiting to give their final farewell to their longest-reigning Monarch.

According to the Royal Family’s official website, “On the afternoon of Wednesday 14th September, the Coffin will be borne in Procession on a Gun Carriage of The King’s Troop Royal Horse Artillery from Buckingham Palace to the Palace of Westminster, where The Queen will Lie-in-State in Westminster Hall until the morning of the State Funeral.”

Following a short service conducted by the Archbishop of Canterbury, the Lying-in-State will commence until Monday, September 19.

The Lying-in-State will be the last time the public will have the opportunity to visit and pay their respects to the Queen before her final procession to her state funeral service.