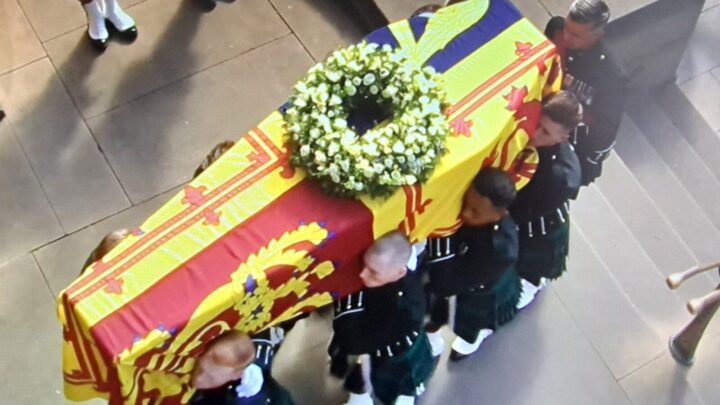 Large crowds gathered in Scotland's capital as King Charles III led the British royal family in a procession behind the coffin of his mother. Source: Twitter @RegalFille

Tens of thousands of people have packed the streets of Edinburgh, crammed together on the Royal Mile as they wait in silence for Queen Elizabeth II’s coffin to pass.

Massive crowds that neared an estimated 20,000 lined the streets to pay their respects.

Big crowds already gathering on the Royal Mile. It won’t be until just before 3pm that they’ll see the Queen’s coffin and the Royal family following behind #QueenElizabeth #KingCharlesIII pic.twitter.com/FWQh7frxqf

“She’s like a member of my own family. There’ll never be anyone like her,” Tina Richardson, 63, a retiree from Dunbar, told Reuters.

“She was such a beautiful lady who gave us all so much. She dedicated her whole life to the country. In good times and bad, she was there, especially during Covid. She united everybody.”

Another mourner, Amy Stevenson, stood in the crowd clutching a bouquet of white roses and hydrangeas.

“They are actually my wedding bouquet. I thought it would be nice to bring them up and lay them for the Queen,” she tells the Independent.

They both stood patiently in the tightly packed street as the Queen’s coffin made its slow, sombre journey from the Place of Holyroodhouse to St Giles’ Cathedral.

Her Majesty The Queen’s coffin is taken in Procession to St Giles’ Cathedral.

Draped with the Royal Standard in Scotland, the coffin was flanked by the Bearer Party from the Royal Regiment of Scotland, and escorted by The King’s Body Guard for Scotland and The Queen’s children. pic.twitter.com/GSqcifVGWP

Camilla, Queen Consort, and Sophie, Countess of Wessex, also followed the hearse in a car just behind Queen Elizabeth’s children.

However, as the King and his siblings continued their walk, the procession’s peaceful silence was punctured by a protester heckling Prince Andrew.

The heckler had made it to the barricades, close enough to the senior royals, and proceeded to shout at the disgraced Prince.

His cries of protest were soon drowned out by the crowd’s chants of “God save the King”.

Since his involvement with notorious sex offender Jeffrey Epstein, Andrew has remained a controversial figure in his family.

He has since been stripped of his honourary military titles and is no longer a working royal.

Unlike his siblings, Andrew has been barred from wearing his military uniform to events remembering the Queen.

King Charles led his siblings – The Princess Royal, The Duke of York and The Earl of Wessex – in a vigil this evening as they stood with heads bowed beside The Queen’s coffin in St Giles’ Cathedral, Edinburgh. pic.twitter.com/m23grKa3IL

Upon their arrival at St Giles’ Cathedral, King Charles III and his siblings held a 10-minute vigil for their late mother.

With their heads down, the Queen’s children stood next to her oak coffin which was draped with the royal flag known as the Royal Standard of Scotland and topped with a wreath of white flowers.

Her Majesty’s coffin is scheduled to lie at rest at St Giles Cathedral for 24 hours to allow the people of Scotland to pay their respects before Princess Anne and the Royal Air Force transfer the Queen to Buckingham Place, to rest in the Bow Room.

Following Queen Elizabeth II’s death, aged 96, on Thursday, September 8, a series of constitutional and ceremonial events have already taken place both in the UK and within The Firm.