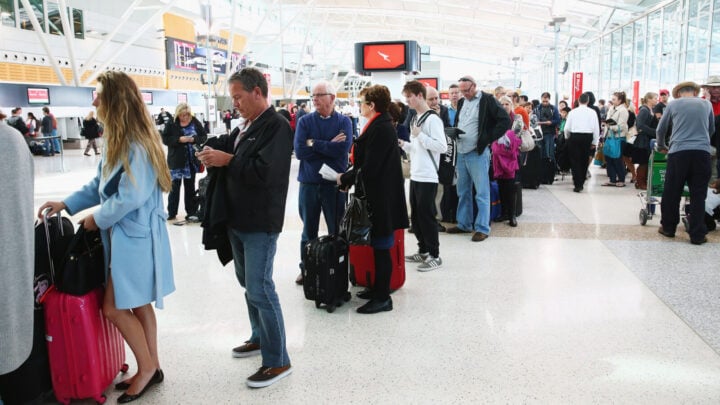 The path back to international travel may be a lot more confusing than first thought. Source: Getty

There’s been a lot of talk about the AstraZeneca jab this week, and whether it’ll be considered “good enough” to allow you to travel around the globe freely.

In the United States, the AstraZeneca vaccine, which has been linked to rare blood clotting, has still not been approved by the US Food and Drug Administration (FDA). This is proving to be quite a worry for those in Australia and the United Kingdom, who have relied heavily on the vaccine. Just last month, the US barred fully vaccinated people from entering a Bruce Springsteen concert because they hadn’t been vaccinated with an FDA-approved jab – namely, Pfizer, Moderna and Johnson & Johnson.

British travellers face a similar fate in Europe, where certain batches of AstraZeneca are still not approved either. The Telegraph reported last week that up to five million British people who were given the controversial jab may not be able to go on holiday in Europe if their dose came from a batch manufactured by the Serum Institute of India.

Now, speaking on Channel Seven’s The Latest 7 News, Professor Mary-Louise McLaws, a leading epidemiologist, warned two Covid-19 jabs may not be enough to be protected, saying a third coronavirus shot may be needed before Australians can travel overseas again.

International travel has been off limits since March last year, when Australia closed its borders. They aren’t expected to reopen before the country reaches phase three. You can read more about Australia’s four-phase plan out of Covid here.

“With more research done, and as we’re learning more about Covid-19, it would appear we need a third shot, preferably around eight months,” she said. “But that (time) would depend on what your vaccine efficacy was.”

McLaws also said that a mix-and-match approach with Pfizer and AstraZeneca vaccines could provide a strong immune response against the disease. “I think everybody will have to have a booster,” she said. “The Oxford University researchers are having a look at different types of doses — so they’re looking at different studies, with the first dose being AstraZeneca or Pfizer, and the second being a different one. And it looks like that mix and match could give you a better response.”

She also commented on the ongoing speculation that some countries might not accept travellers who have had two doses of the AstraZeneca jab. “I haven’t seen anything absolutely definitive yet, but this might fit in with everybody getting that third booster with Pfizer so that we can, of course, go into the US,” McLaws said.

As of Wednesday, 8.26 million doses of Pfizer and AstraZeneca had been administered in Australia. The AstraZeneca vaccine is only recommended for those over the age of 60, however Prime Minister Scott Morrison recently announced that those in the younger cohorts who would like the jab can do so, if they first consult with their GP.

What are your thought on this?