Pfizer and AstraZeneca mix could lead to stronger response 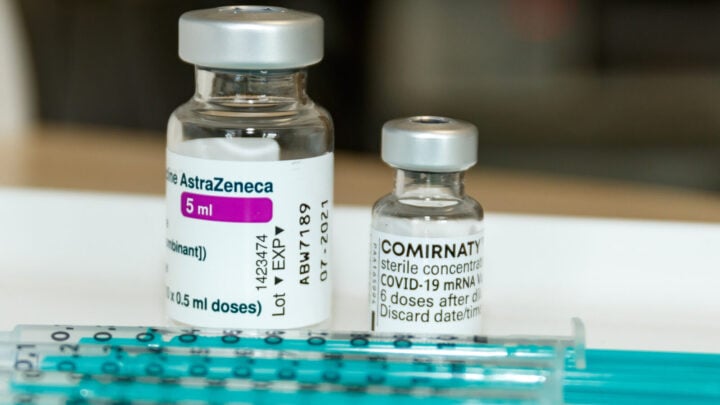 Studies have shown a combination of vaccines could lead to better results. Source: Getty

A series of studies in the UK have found promising data which suggests that a mix-and-match approach with Pfizer and AstraZeneca vaccines is not only safe but could provide a strong immune response against the disease.

The mix-and-match study, named ‘Com-COV’, is being funded by the UK government and currently has 830 volunteers. The preliminary findings, which were announced on Monday, come after testing the combination of Pfizer and AstraZeneca, but further analysis will be done to include vaccines by Moderna and Novavax. The results of the study are too early to change any official recommendations, though experts say it could lead to more “flexibility” across the globe.

The study, led by the University of Oxford, revealed that alternating doses of Pfizer and AstraZeneca improved the immune response, however, the order of vaccines did make a difference. It found that AstraZeneca followed by Pfizer improved the immune response more than Pfizer/AstraZeneca schedule, while both of these led to higher antibodies than the “highly effective standard” two doses of AstraZeneca. The study found that the highest antibody response of all was seen after two doses of Pfizer, while the highest T cell response was from AstraZeneca followed by Pfizer.

The early findings are yet reviewed by independent scientists, but do support the practice of mixing vaccines which is already underway in several countries, including Canada and parts of Europe. These countries began mixing vaccines for a variety of reasons, including supply issues and changing health advice. In parts of Europe, following the links between blood clots and AstraZeneca, health advice changed to advise against younger adults getting the AstraZeneca shot, meaning they were then offered either Pfizer or Moderna for their second dose.

A second study out from Oxford on Monday also suggested the AstraZeneca vaccine improved immunity when used as a third dose or booster, six months after two doses of the same shot.

Professor Matthew Snape, associate professor in paediatrics and vaccinology at the University of Oxford, and chief investigator on the trial said the aim of the study was to see to what extent these vaccines could be used interchangeably, hopefully leading to more flexibility in the UK and global vaccine rollout. He said the results showed that when given at a four-week interval both mixed schedules led to an immune response that was an improvement on having AstraZeneca only.

“Given the UK’s stable supply position there is no reason to change vaccine schedules at this moment in time,” he said. “The results for the 12-week interval, which are yet to come, will have an instrumental role to play in decisions on the future of the UK’s vaccination programme.

“Our non-mixed… vaccination programme has already saved tens of thousands of lives across the UK but we now know mixing doses could provide us with even greater flexibility for a booster programme, while also supporting countries who have further to go with their vaccine rollouts and who may be experiencing supply difficulties.”

The news comes as Prime Minister Scott Morrison announced on Monday evening that those under 40 are now able to get the AstraZeneca jab, paving the way for more adults to get vaccinated so long as they are willing to take on the small risk of a blood clot. Following the widely criticised vaccine rollout, Morrison said Australia should not accept the death rates seen in other countries with very high vaccination rates.

“If they are willing to go and speak to their doctor and have ­access to the AstraZeneca vaccine, they can do so. So the answer is yes, they can go and do that,” he said. “We will be implementing a new no-fault indemnity scheme for general practitioners who ­administer Covid-19 vaccines. So this relates to encouraging Australians to go and check in to their GP about the vaccination.

“Even as the UK is finding with an 80 per cent vaccinated population, they’re not there either ­because they’ve got over 100 people dying every week. And so that’s not a situation that I’m prepared to countenance. And one of the reasons why Australia is in such a unique position compared to the rest of the world is Covid is riddled through all of those countries.

“Their opportunity to ensure that the absolutely calamitous ­impact of this virus and the new strains doesn’t impact on them is much more limited than here in Australia, because of the success we’ve had to date. It would be unwise to surrender that advantage at this point and preferably at no point.”

So, would you consider getting AstraZeneca if you knew your second dose would be of Pfizer?