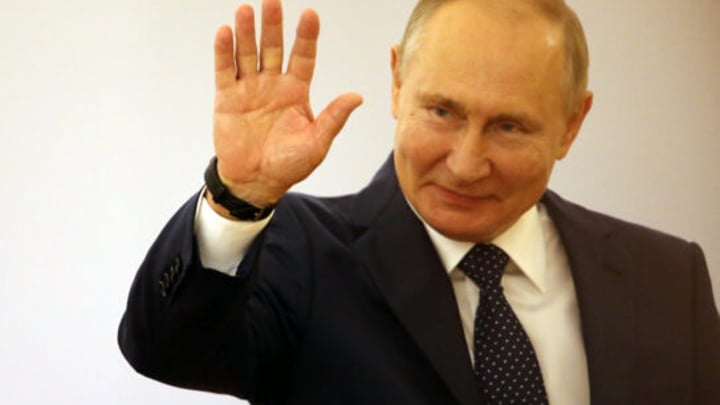 Love him or loathe him, there’s no denying that Vladmir Putin can take an epic photo. If you’re not already aware, Russian President Vladimir Vladimirovich Putin publishes a calendar each year which is nothing short of a masterpiece. Available in several sizes, the calendars include an eclectic range of photographs including Putin playing ice hockey, a topless Putin sunning himself on a boat, a kitted out Vlad doing some form of martial arts, and a bare chested President holding a rifle.

For those of you lucky enough to have this year’s edition gracing your wall, you’ll notice the October spread showing a playful Putin cosying up to a baby leopard. If you’re only finding out about these calendars now, I can imagine the devastation for having missed so many years. Fear not, you can get all of the Putin calendars here.

The deliverance of photographic excellence isn’t exclusive to calendars, Putin has released some new photos for his birthday. Turning 69 years old, the Russian President has chosen an incredible photo to share with the public, treating us with the gift of this photo shoot. Putin is impeccably dressed in a navy suit, walking through a field scattered with dandelions, alongside a large bear.

One of the most popular world leaders, President of Russia in 2000-2008 and since 2012 – Vladimir #Putin is celebrating his birthday today!#KeepCalm #Putin69 pic.twitter.com/lNMCaR8iCv

A twitter user, Studio Hermit, was quick to point out that the bear was photoshopped from a diorama at the American Museum of Natural History in New York.

That bear is Photoshopped from the diorama at the American Museum of Natural History in New York. It’s… not even a Russian bear. pic.twitter.com/oGQd97FB1A

While another twitter user, Iain Macwhirter, decided to show off their own photoshop skills to produce this excellent response to the photo.

Not to be outdone, twitter user, Spector Scare Day, gave us this gift.

There have been no official reports to suggest that a bear celebrated the President’s birthday in the Kremlin, so we can only go on wild speculation. Regardless of the legitimacy of this (or any other photos) we wait with bated breath for the release of the 2022 Putin calendar.

Have you seen his calendars? What are your thoughts on politicians as pin ups?