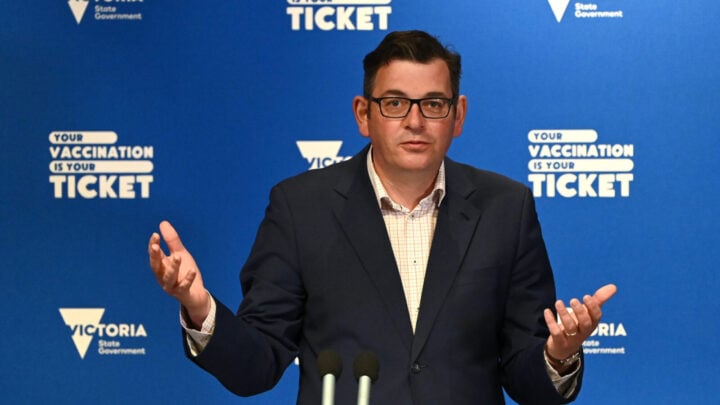 The private prosecution brought by a Victorian man against Victorian Premier Daniel Andrews has been struck out by the court.

The prosecution, brought by anti-vaccination protestor Anthony Herman, alleged the Premier was ‘concealing an overt act of reason,’ and was due to be heard in Myrtleford Magistrates court on Friday morning, December 17, 2021.

The Daily Mail reports that Andrews had allegedly been accused of “concealing an overt act of treason”. The Parliament of Australia officially defines treason as the common law term for:

In Victoria, private citizens can have a criminal prosecution filed for the cost of $85.70.

According to The Daily Mail sources have shared that this particular prosecution was filed at several courts and rejected, before finally being accepted at Myrtleford Magistrates Court. The matter has been listed on EFAS, the Victoria Courts Electronic Filing Appearance System.

However, the online hearing was cut before the matter was heard but the AAP has confirmed the case was struck out.

According to The Guardian, More than 900 people were in attendance at the online hearing, including many who oppose Andrews and the state’s Covid-19 regulations.

The hearing had quickly escalated into chaos, with people taking and sharing their screens with vandalised images of Andrews.

One person had edited an image of Andrews as North Korean leader Kim Jong Un. The massive number of people in the online hearing had caused delays in Andrews’ case- along with other cases waiting to be heard in the local court.

“Seriously, this is a joke. Some of us are here for legitimate court cases and are being held up by all of you and the palaver you are creating. Find another focus and move on,” one woman said.

Throughout the pandemic, online hearing attendants were instructed to put themselves on mute, but on Friday the opposite had occurred with dozens of participants choosing to unmute their microphones. The Guardian reports that many of these participants chose to use this opportunity to share the rallying cry “sack, Dan Andrews.”

The Guardian also reports that others speculated the hearing was a conspiracy designed to distract them from the actual hearing.

“Is this a decoy? Where is the judge,” someone with the username Sovereignlaw wrote.

“Looks like a fake meeting to me. Just to piss people off,” Debbie added.

Outside the court, there was a crowd of about 100 protesters who gathered for the case.

This matter involving Andrews is listed as being a mention, which means that the charge will simply be read to the defendant, and the person can plead either guilty or not guilty.

Should Andrews plead guilty, the magistrate will determine the penalty for the charge, and can either make a decision immediately, or can adjourn the decision making, and hold a sentencing hearing on another day.

Should Andrews plead not guilty, the case will move to the contest mention, which may happen as soon as the plea is made, but is usually adjourned to a later date.  This includes deciding on the details of the proceeding, and witnesses to be called.

Victoria Police has confirmed that one man was arrested for unrelated matters.