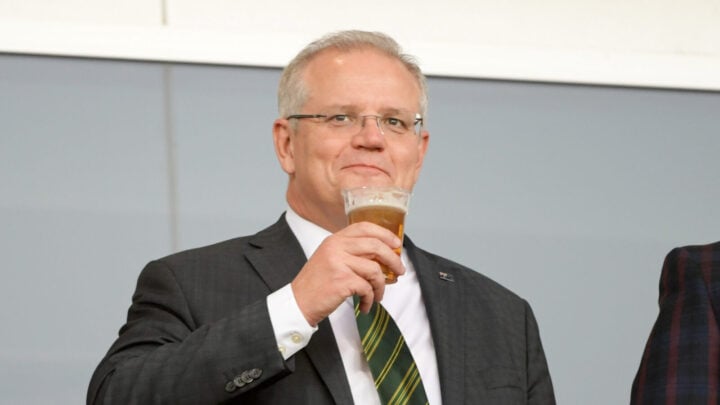 Australian Prime Minister Scott Morrison has made a cold joke while visiting the Toohey’s brewery today, but his ‘pour’ timing has left many foaming.

While visiting the Toohey’s Brewery in Western Sydney, Morrison was introduced to various workers at the brewery, including one young woman, an Irish worker named Claire.

Speaking to the press about Australia’s economic recovery, Morrison said: “I want to encourage Australians who have yet to get back into that workforce. Those jobs are there. The employers are looking for you. So please get out there and sign up and let’s get back into this economy and making sure it’s moving forward strongly for young people, but particularly for women, it’s great to see here.”

Continuing, Morrison shared an anecdote about the young professionals he had met while touring the brewery.

“I met Lizzie before, from Zimbabwe. Now Lizzie has come here as a migrant, as so many workers and people of different backgrounds right here in the electorate of Reid have. And to see Lizzie, Giselle who has come from Venezuela and of course, Claire from Ireland.”

This is where the trouble began for Morrison, as he couldn’t resist adding a little comment.

“Of course, there’s going to be an Irish girl here in a brewery.” Uh oh.

“With their brewing skills, and these skills are being brought from all around the world.”

This comment raised several eyebrows, with many suggesting the remarks associating Irish people and beer are casual racism at its finest.

Morrison continued: “But it’s great to see female apprentices, female engineers here, part of the biggest brewery operation here in New South Wales and the second biggest in the country. And it’s great to see young women taking on those roles coming out of university, training other women coming up through plants just like this.”

However, this second set of comments about women training other women has sparked an even bigger debate, with many labelling them as sexist, misogynistic and backwards.

The irony is that I’m more likely to run into him or Barnaby Joyce at a brewery than “an Irish girl” who is undoubtedly a fully grown woman but yeah…misogyny.

Ironically, these comments come on the same day that the Australian Beer Industry calls for change in the treatment of their staff, specifically, female-identifying staff.

Jayne Lewis from Two Birds in inner-west Melbourne has helped spearhead this call for action with campaigners Beer Agents For Change, sharing with the ABC that: “The experiences run the whole gamut — from just going into a bar and being treated like you don’t know what you’re talking about simply because you are female, or female-presenting, through to the worst things you could imagine.”

Surveying 220 beer industry workers about their experiences with harassment and abuse in the industry, a staggering 38 per cent of respondents said they had been harassed or abused at work. “The experiences run the whole gamut — from just going into a bar and being treated like you don’t know what you’re talking about simply because you are female, or female-presenting, through to the worst things you could imagine,” she said.

Even more strikingly, 20 per cent of the respondents had experienced sexual abuse or harassment at work.

Of those who reported abuse or harassment, 90 per cent were women, reposts ABC.

“It’s been really confronting to see the numbers in black and white, even for us,” said Tiffany Waldron, another activist from Beer Agents for Change.

“We knew that anecdotally there was an issue, but we probably needed to hold a mirror up to the industry and show everybody what it really looks like from the outside and from the inside … We needed to draw a line in the sand.”

“It’s all of the million little things that happen at every beer festival, every bar, in every workplace that we’ve all worked in.”

“All of those little things have really led us to go, ‘This is a much bigger problem.’

“We want to make sure that younger women who are coming into the beer industry don’t have to put on a thick skin just to be able to survive.”

Morrison’s comments at Toohey’s brewery today seem to directly confirm the experiences and anecdotes shared by Beer Agents for Change, surrounding the treatment of women in the beer industry. If Morrison really is on the early campaign trail, then he sure has sure given himself some backwash today. After all that, I’m sure Scomo feels like a Tooheys or two. I sure do.

Do you think Morrison's comments were in 'pour' taste?