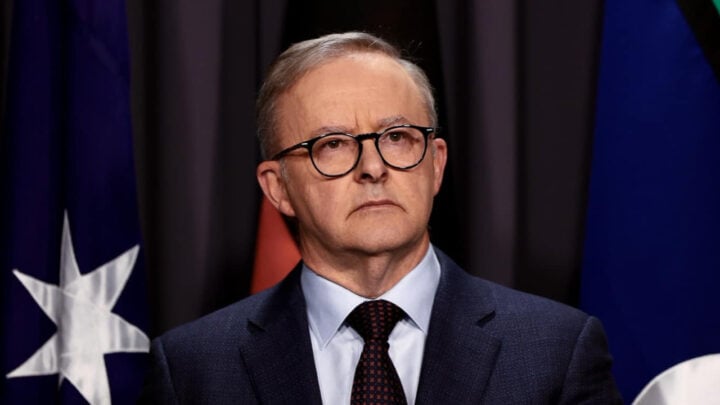 Prime Minister Anthony Albanese has said the government “can’t solve everything”, admitting many elements of Australia’s rising cost of living crisis are “beyond control”.

Australians are suffering through skyrocketing food, petrol, gas and rent prices, with the Reserve Bank of Australia expecting inflation to hit 7.75 per cent by the end of the year, currently sitting at 6.1 per cent – the highest it’s been in 20 years.

Speaking on Sydney’s 2GB radio, Albanese said the government is doing what they can, despite outside factors.

“Some things beyond our control, for example, the Russian invasion of Ukraine had an enormous impact on energy prices and on supply chains around the world,” Albanese said.

“And we‘ve seen inflation rise to double digits in the UK, for example, in North America it is much higher than it is here.

“We want to make sure that we deal with putting downward pressure on inflation by dealing with supply-side issues.

“There are things that the government can do. It can’t solve everything, of course, but we’re very focused because we understand the pressures that families are on out there.”

Albanese said the government’s priority is keeping the cost of medications affordable and following through on his election promise of cheaper childcare.

However, Treasurer Jim Chalmers has promised October’s Federal Budget will provide “long-term” and “sustainable” relief to the cost of living.

In an interview with Sunrise, Chalmers said that the budget will offer a “responsible” relief package that targets areas such as “medicine, childcare, getting power bills down over time, and getting wages moving again”.

“Inflation is going to get worse before it gets better, that’s the unfortunate reality.

As the rising cost of living continues to place increased pressure on all Australians, seniors were recently dealt a devastating blow after the latest findings from the Association of Super Funds of Australia (ASFA) revealed that retirees will now need to spend more in order to retire “comfortably”.

ASFA Deputy CEO, Glen McCrea pointed to the “ever increasing health costs” that retirees are faced with as a major contributor to the increased cost of retirement.

The growing costs associated with healthcare aren’t the only expenses impacting retirees with increases in non-discretionary items such as groceries and fuel hitting seniors’ hip pockets.

The price of fuel has shot up 32.1 per cent over the last year while vegetables and beef have seen increases of 14.6 per cent and 9.4 per cent respectively. Even a daily cup of tea has been impacted with a 9.3 per cent price hike on coffee and tea products.

As the government shifts its focus to “good jobs, good wages, and more opportunities” this week in an effort to combat the pressures associated with the rising cost of living, the Greens have called for a two-year freeze on rental price increases, claiming the proposal will allow wages to catch up with the rental market.

BREAKING: This morning I’ve called on the Gov to introduce a national 2 year rent freeze. Rents have increased seven times faster than wages putting millions of people into severe rent stress. We need to act now to avoid a national tragedy. https://t.co/4xTNm7ngjO

“It’s completely unsustainable to have a situation where someone’s rent can go up by as much as the landlord or real estate agent wants,” Greens Spokesperson for Housing and Homelessness Max Chandler-Mather told ABC News.

“We’re not calling for rents to be cut or reduced. We’re just saying there needs to be a bit of a pause.”