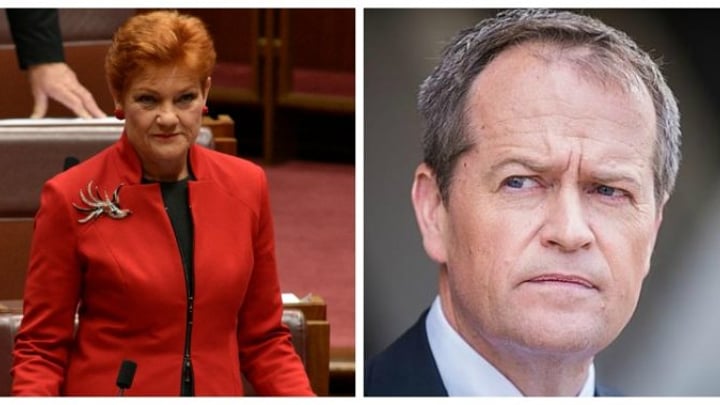 It seems there is no love lost between Senator Pauline Hanson and Bill Shorten, as Hanson publicly confessed that she doesn’t like or trust the Labor leader in a scathing online rant.

The 64-year-old Queensland representative said the leader of the opposition “leaves her cold” and called out the 51-year-old over his alleged lack of experience outside of politics, saying Shorten “has no idea”.

Writing on her Pauline Hanson’s Please Explain Facebook page, she said: “I don’t know about you but Bill Shorten leaves me cold.

“Bill Shorten has no connection with grassroots Australians. He’s come straight out of university, into the unions, into politics, he’s never employed one person, he’s never had a business. He has no idea. When it comes to Bill Shorten I just say keep away.”

She also told the Courier Mail that she doesn’t like Shorten personally, adding:“I don’t trust him. It’s women’s intuition. I don’t feel warm to him. I don’t feel like I connect with him.”

Deputy leader of the Australian Labor Party, Tanya Plibersek spoke out in support of her colleague and said: “If Pauline doesn’t like us, we’re doing something right.

“Bill Shorten has spent his life fighting for better conditions for working people – every day he’s standing up for Queenslanders against the LNP’s cuts to schools and hospitals.

“Was it her ‘intuition’ that made her suggest that vaccinating children against disease is something parents need to ‘investigate’?”

Hanson and Shorten have been at loggerheads recently after Hanson supported Prime Minister Malcolm Turnbull’s tax cuts bill, which the Leader of the Opposition was opposed to.

Last week Hanson came out and said that Shorten would be “the worst bloody prime minister we’ve ever had”, after Labor put out a robo-call that blasted Hanson for siding with the coalition government over Turnbull’s $144 billion income tax cuts bill.

The automated call said: “She’s even giving herself a massive tax cut. But it’s not too late to stop her. Pauline is in Canberra right now, the final vote could happen at any minute. Press 1 to be connected directly to Pauline’s office to tell her yourself: stop selling Queenslanders out.”

What do you think? Are Pauline Hanson’s comments too personal or do you admire her honesty?