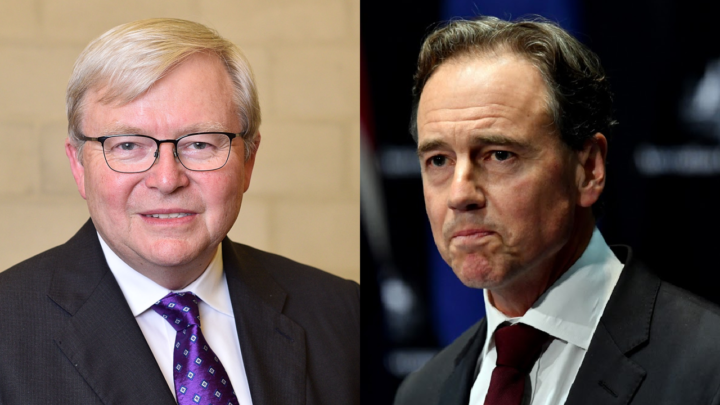 Former Australian prime minister Kevin Rudd has taken a swipe Tuesday morning at Health Minister Greg Hunt, calling for him to resign. It comes a day after news broke that Rudd met with the CEO of Pfizer, Albert Bourla, in June, in a bid to accelerate the vaccine rollout, stating he was acting as a “concerned citizen”.

Last Thursday, news broke that the Morrison government would be ramping up the vaccine supply, with the 4.5 million doses expected to arrive in September now brought forward. However, an ABC News article published on Monday alleged that the Pfizer changes came about from the intervention of anonymous senior business figures and the former prime minister – rather than by government negotiations – as Prime Minister Scott Morrison had led us to believe.

On Friday, following the news, Morrison conducted an early morning media blitz, congratulating his government on the Nine Network’s Today show. “We have been working with Pfizer now for quite some time to bring forward our supplies … I commend Minister [Greg] Hunt and Professor [Brendan] Murphy and Lieutenant General [John] Frewen for the great job getting those supplies brought forward,” he said.

Rudd has now slammed Hunt, after the health minister told 2GB radio yesterday that he “did chuckle when [he] saw the story”. “We [knew] that once the government announces it, that letter from the former prime minister’s likely to be put out there,” Hunt said at the time. “But we appreciate all of the help, even if it hasn’t added to the outcome.”

Speaking to the ABC’s Radio National program on Tuesday morning, Rudd hit back, saying, “Rather than him having a chuckle about all of this, Mr Hunt frankly needs to get real about his job. And frankly, if he had any sense of self-respect, he’d resign as health minister for presiding over what Malcolm Turnbull has described as the ‘biggest failure of public policy in this country’s recent history’.”

Earlier this month, former Liberal prime minister Malcolm Turnbull labelled the Morrison’s government vaccine rollout “a phenomenal failure”. “This is just a failure to do the single most important job the Commonwealth government had, which was to get the country vaccinated. It’s hugely disappointing,” he said at the time. “I can’t think of a bigger black-and-white failure of public administration than this.”

So far, only 8.9 per cent of the Australian population is fully vaccinated against the virus. It’s a stark contrast compared with the United States’ figures (48.2 per cent) and the United Kingdom’s (52 per cent).

Have you been following this story? Do you agree with Kevin Rudd?