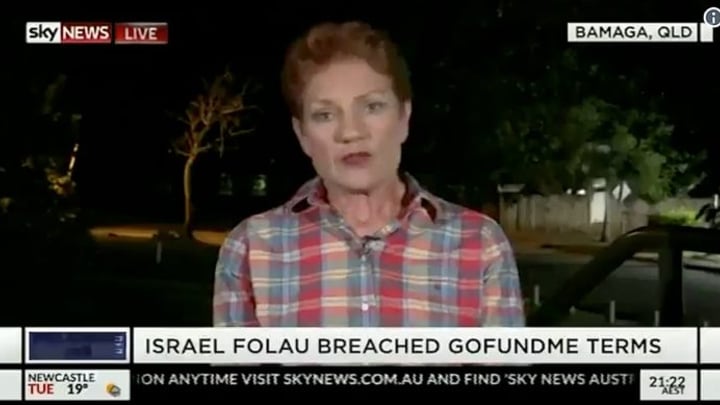 One Nation leader Pauline Hanson has thrown her support behind controversial rugby star Israel Folau, claiming everybody deserves the right to express their own thoughts and opinions.

The politician spoke out in defence of the sportsman, who was sacked from his position with Rugby Australia over posts on social media which suggested homosexuals, among other social groups, would be going to hell.

Folau has since launched an online appeal in which he asked the public to donate $3 million towards his costly legal fight against Rugby Australia. However, this was soon pulled down by GoFundMe amid an outpouring of criticism from the public.

Speaking out about the situation in a chat with Sky News on Tuesday, Hanson said she can relate to how Folau is feeling, having been called a racist in the past.

“I support Israel, I really do over this, because whether it’s GoFundMe which shut him down, I think that’s wrong in itself as well, he is actually standing up to them and good on him,” she exclaimed.

“I had to stand up to them over the years because I was called a racist and they tried to shut me down. A precedent is going to be set here. I hope he takes them on and I hope he does prove to be right in what he’s saying, that he has a right to have his own thoughts and say what he wants to say.”

The politician continued by calling on other Aussies to back to rugby player, claiming she will do all she can to support Folau in his battle against Rugby Australia.

“I support him fully and I hope he keeps going and if you want to fund him I hope he puts up a trust through a lawyers office or I’m quite willing to help in any way that I possibly can because it’s just not about him,” she added.

“This is going to set a precedent for all Australians so think about that and you better get behind him and support him because they are trying to shut us down as much as they possibly can.”

Her message received mixed views with quite a few taking to social media to congratulate Hanson for speaking out and supporting the sports star.

“This woman is spot on,” one person wrote on Twitter. “She is not as silly as so many on the left want you to think. She is an average Aussie who thinks about the implications of political correctness in Australia.”

However, others weren’t so supportive, claiming Folau needs no support and should be funding his own legal battle.

“This is the first time I have not agreed with you Pauline,” someone said on Twitter. “I thought you were for the battlers. Israel Folau is a multi-millionaire he should fund his own court costs.”

“Held him? He’s a multi millionaire for crying out loud,” a second wrote.

Have you been following this story? Do you think it was right of Rugby Australia to sack Israel Folau?