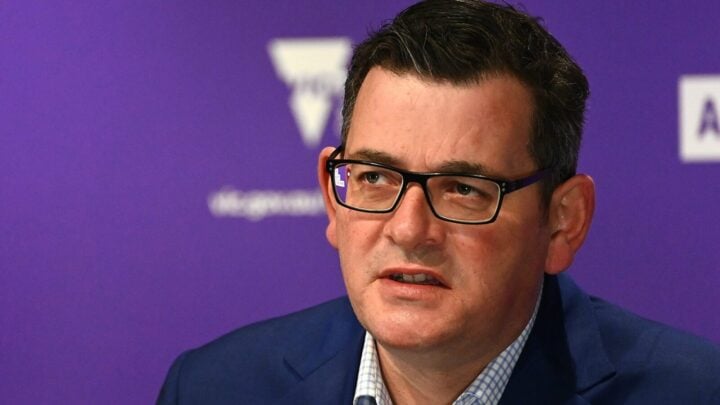 Premier Daniel Andrews has announced coronavirus restrictions across Victoria could last another 12 months. Speaking in a press conference on Monday, Andrews said the state can’t afford to have the restrictions end. Victoria’s state of emergency is due to end on September 13.

“An Act of the Victorian parliament provides for a maximum of six months for the running of that state of emergency,” he said.

He continued: “We simply can‘t have those important roles in the legal framework that sits behind them end on 13 September. We will extend the state of emergency provisions within the public health and wellbeing act for a maximum of 12 months. So that means it will be a total of 18 months.”

The premier then thanked Vicotirans for their efforts so far, saying: “Can I thank every single Victorian who through making that profound contribution, the right choices, knowing and accepting that we are all in this together, knowing and accepting that while we will love it to end tomorrow, it won’t end tomorrow, we have to stay the course, don’t let frustration get the better of us, the only thing that wins if we let that happen is this wicked virus.”

It comes as Victoria reported 116 new cases and 15 deaths from coronavirus in the past 24 hours, bringing the state’s death toll to 430. The premier confirmed that the deaths include three females and five males in their 80s, four females and two males in their 90s, and one female in her 100s — all of these fatalities are linked to age care outbreaks. Meanwhile, there are 629 Victorians in hospital, 31 of those receiving intensive care and 17 of those 31 are on a ventilator.

It also comes as Queensland declared much of south-east Queensland to be a ‘restricted area’ following the emergence of nine new virus cases on Saturday.

Six of the cases were linked to a youth detention centre where a supervisor tested positive earlier this week. Queensland reported just one new Covid-19 case on Monday, the ABC reports. Gatherings have been restricted in the areas to 10 people (30 people are permitted outside the restricted areas) but there are no wider restrictions in Queensland on travel, sport, shops or entertainment facilities.