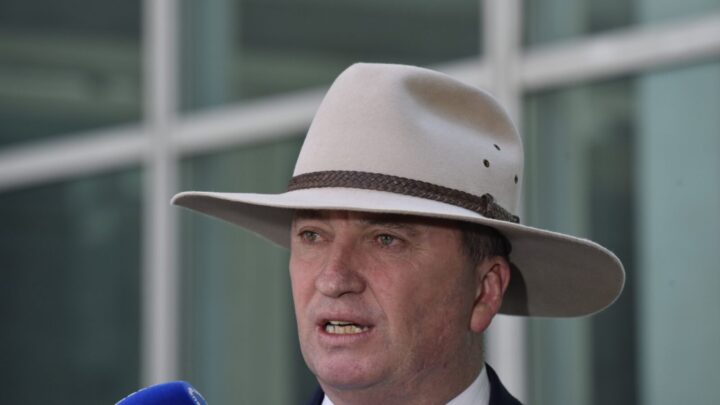 Barnaby Joyce says Littleproud and his team have a "mighty task ahead". Source: Getty

A day after losing his position as Nationals leader to David Littleproud, former Deputy Prime Minister, Barnaby Joyce congratulated Littleproud for his win but cautioned that he and his team have a “mighty task ahead of them”.

Shortly after being ousted on Monday, May 30, Joyce stated via a Twitter video: “I suppose you think I’m sad. Not really”, claiming he “gave every ounce” of his energy to ensure the needs of regional Australians were met.

I want to congratulate David, Perin and Bridget. They have a mighty task ahead of them and I will give them all the support I can.

Joyce also stated in the video that he had the “chance to get back to my second greatest love, after my family, and that is my beloved people of New England, where I will have more time to get around my electorate and to be a person of service to them.”

Speaking to reporters the day after losing his leadership position, Joyce says the “reset” meant it is “really important” for the Nationals to go forward, and he would be there supporting them.

“To be frank, it is a weight off my shoulders, to be honest. I went to the election saying that on behalf of my colleagues, I would hold every seat and we did that, got close to winning another two,” the former leader said.

Joyce then continued to say as deputy or leader, he had “never lost a seat, only won them” with this year’s election being “pretty hard”, before revealing he was “transitioning” out of politics.

“I always said, and I am surprised it never leaked, I was transitioning out of the leadership and that was what I was going to do. I probably didn’t want to do it yesterday but that is life. That is politics. Now there is a new leadership team and I wish them all the very, very best,” he said.

Barnaby Joyce describes losing the Nats leadership as “kind of a weight off my shoulders” #auspol pic.twitter.com/Wiz8MvLdxw

Joyce was then questioned why he waited until half the term to give up his position as Nationals leader and why Littleproud was unaware of his plans to step down.

“I said it actually when I stood for the leadership when there was a change between Michael and myself. I said this is a transition to a new leadership team. I have said that all the way through … also I didn’t think it was fair to the Australian people to say I was the leader last week and I am not the leader this week. I had to stand because I had a contract to the Australian people and they would be pretty disappointed … it was incumbent upon me to stand and I stood and I didn’t win and that is life,” Joyce responded.

Despite the Nationals’ party room consisting of only 22 people, results from Monday’s spill took more than two hours to announce but saw Littleproud oust Joyce and defeat former minister Darren Chester in a three-way contest.

Leading the Nationals party has been a 40-year long dream for Littleproud, who says he’s been longing for the position since he was a 6-year-old boy.

The leadership change comes after the crushing defeat of the Liberal Party at the 2022 Federal Election, with many members of the National party blaming Joyce and his climate change beliefs for the Liberal’s losses.