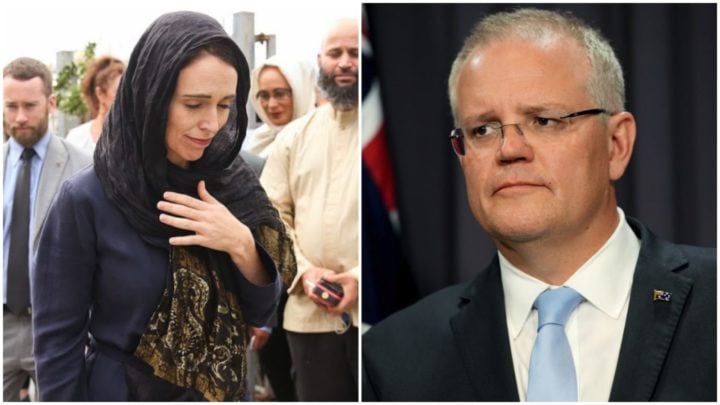 Ardern has been praised across the globe for her response to last Friday's terror attack in Christchurch. Source: Getty.

In the wake of last week’s devastating terror attack in Christchurch, New Zealand Prime Minister Jacinda Ardern has been thrust onto the world stage with many people praising the leader for her actions and words following the terror attack that saw 50 Muslim worshippers killed when alleged gunman Brenton Tarrant opened fire.

Now an online poll has seemingly revealed that Ardern holds favour with Australian voters too, with an overwhelming majority of people naming “true leader” Ardern as their number one choice to lead Australia as the country prepares to head to the polls in May.

The survey, published on Twitter by The Project panelist Hamish Macdonald, posed the question: “Australia, who is your preferred PM?” Respondents were then given three options to choose from; Jacinda Ardern, Scott Morrison or Bill Shorten.

An incredible 81 per cent of respondents opted for Ardern, who was elected as New Zealand’s third female leader in 2017.  Opposition leader Bill Shorten came in second place with 15 per cent of the vote, followed by ScoMo with just four per cent.

One Ardern supporter wrote: “Not sure @jacindaardern would take us on to be honest… but I’d choose her any day of the week!” While another described the poll as a “no brainer”.

Another user said: “It seems @jacindaardern’s destiny has been laid bare, to show us all that strong leadership demands an authentic connection to the heart and people. Trump had shown us that narcissism is outdated. It’s up to us.”

However not everyone thought the mother-of-one, 38, was the right woman for the job with one person saying: “She is Not a Candidate for Australian election. I choose Bill Shorten.” Another wrote: “Would love to see Waleed give politics a go, he’d make a great pm.”

The results could spell bad news for ScoMo, with just weeks to go before the next federal election, and the PM had a run in on live television this week as he went head to head with The Project’s Waleed Aly on Thursday night’s episode of the Channel Ten show.

Morrison’s appearance came after Aly repeated the claim that Morrison encouraged the Coalition in 2011 to use community concerns about Muslims to gain votes — an allegation that the prime minister has called “a disgraceful smear and an appalling lie”.

During the heated debate, Aly asked the prime minister if Australia has an Islamophobia problem.

“I don’t know if Australia understands Islam very well, and that can often lead to fear of things you don’t understand. That doesn’t always translate into extremism,” Morrison replied.

Morrison was also pressed on whether the Coalition had a problem with Islamophobia, to which he responded: “No I don’t believe the Liberal party does… I can’t speak for the National party.

“Our party is made up of a lot of individuals and in our party, individuals have a lot more freedom to say what they thin than a lot of other parties. And it is not for the party to answer for every single member on every single occasion.”

Morrison, in turn, accused Aly — who on Friday gave an impassioned and emotional monologue following the Christchurch terror attack that killed 50 people — of implying that “Muslims couldn’t feel safe because they had a PM who had somehow been prejudiced against them”.

Aly replied, saying: “That wasn’t the implication that I was making.”

What are your thoughts on this story? Do you think Jacinda Ardern is a great leader? Who would you like to see elected in May?