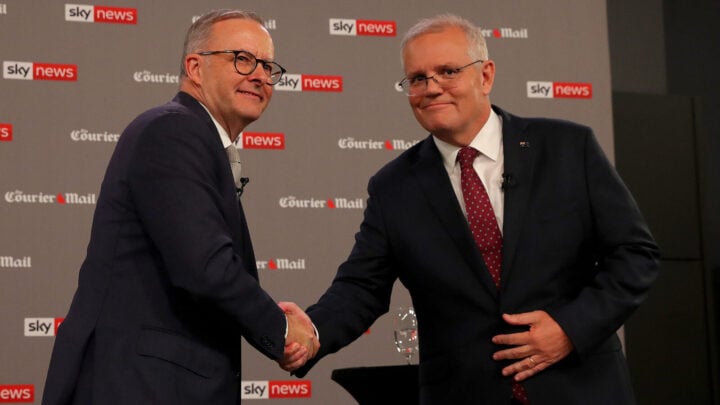 Prime Minister Scott Morrison and Opposition Leader Anthony Albanese have traded blows in the first election debate on Wednesday, April 20, with the Prime Minister unleashing an “outrageous slur” on Albanese.

The debate began with a friendly handshake and quickly erupted into a shouting match as the two prime ministerial hopefuls attempted to get the last word.

When the leaders were asked about China’s new security deal with the Solomon Islands, Morrison accused Labor of taking “China’s side” in what he says is “a very serious issue”.

Albanese slammed Morrison’s accusation as an “outrageous slur”, stating Australia needs to act on the issue.

“China has changed. It’s more aggressive. It’s more active in the region, and we need to understand that and respond to it,” Albanese said.

“They’re not really stepping up, this isn’t so much a Pacific step up – it’s a Pacific stuff up.”

Albanese continued to push for an independent commission against corruption saying it was needed to “restore faith in the political system”.

“Now I think overwhelmingly people go into politics for all the right reasons whether they be Labor, Liberal or minor party people. But the truth is, there’s a stench around a whole range of issues in Canberra,” he said.

Morrison argued he was concerned it would turn into a “kangaroo court”, bringing up Gladys Berejiklian’s resignation after she was probed.

Labor will deliver a powerful, transparent and independent National Anti-Corruption Commission – one with teeth. And we’ll do it this year. We need to restore faith in the political system. pic.twitter.com/bX9YZNWSIn

When asked about how the leaders planned to repair the budget, Morrison said his focus was on getting Australians off welfare and into jobs.

“We’ve got people into work, off welfare and into work. That is the major way you turn a budget around as well as making sure you control your expenditure that has risen because it had to, because we all know when we went into the pandemic, we were facing the biggest crisis we had seen since the Great Depression,” Morrison said.

Albanese’s focus was also on getting people into work, but he said he’d like to focus on vocational education and skills training, adding that the current government is “wasteful” as the country heads towards $1 trillion in debt.

“There was too much waste there. And this has been a wasteful government,” he said.

Morrison has come under fire on social media for claiming that he was “blessed” to have children without disabilities when asked by a mother with an autistic son what his plans for the NDIS were since reports of funding cuts emerged.

“It’s a difficult scheme to manage because every single person who has a disability is different. There’s no cookie-cutter approach to the NDIS,” he said.

ScoMo says he is “blessed” to have two non disabled children. Every child is a blessing. The NDIS is there to help people with disability live their lives to the fullest. The Morrison Gov has slashed NDIS plans for 1000s of children around Australia. Labor will fix the NDIS.

Still thinking about Scott Morrison saying he’s been ‘blessed’ not having a child with disability. Every child is a blessing, and deserves to be a valued and supported member of our community. Morrison doesn’t get it and that’s why the #ndis isn’t working #LeadersDebate #ausvotes

Albanese argued, “Labor does the big reforms” with Morrison acknowledging the NDIS was Labor’s scheme.

Albanese’s final statement ended with a claim that the Coalition government had its time to fix things.

“I want an economy that sees wages being lifted. I want people to enjoy a higher standard of living. I want us to aspire and be as optimistic as we should be as a country,” he said.

In Morrison’s closing statement, he said the election was a “choice” that will impact Australians for the next 10 years.

The election has been called for May 21, 2022.
NewsMediaPolitics
Share:

Who do you think performed the best?