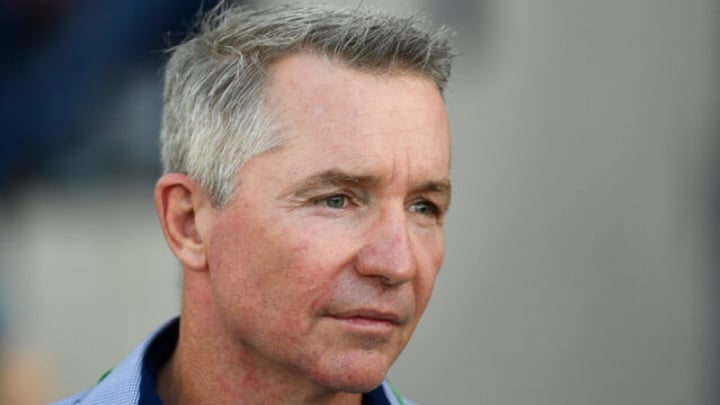 For Green's wife Amanda and their two children Emerson and Jed, the diagnosis has brought some much-needed "peace" and "relief" after they struggled to "come to terms with the loss". Source: Getty Images.

Doctors have revealed that rugby league icon and premiership-winning coach Paul Green suffered from an advanced brain disease at the time of his death, bringing “some peace” to his devastated family.

Green passed away suddenly at the age of 49 on Thursday, August 11 in his Brisbane home after taking his own life.

Green’s family struggled to understand and come to terms with the tragic and sudden loss but a recent call from the Australian Sports Brain Bank’s neuropathologist Professor Michael Buckland has now provided the family with some closure.

After Green’s family made the generous decision to donate his brain to science in an effort to better understand the impact of concussion on sportspeople, Buckland was able to determine that Green suffered from one of the more “severe forms of pure CTE” he has come across.

According to Dementia Australia, chronic traumatic encephalopathy (CTE) is a type of dementia where many repeated head injuries can affect someone’s brain function over time, enough to interfere with the person’s normal or working life.”

“Repeated head injuries can take the form of concussion, or even smaller head knocks without symptoms, which are called subconcussion,” the organisation explained.

Buckland explained to The Australian that “impulsivity” is one of the major symptoms of advanced CTE which could explain Green’s sudden passing.

“It was not him, it was the brain disease, he had an organic brain disease which robbed him of his decision-making and impulse control,” Buckland said.

“He didn’t have mental health problems; he just couldn’t control stuff that was going on in his head.”

For Green’s wife Amanda and their two children Emerson and Jed, the diagnosis has brought some much-needed “peace” and “relief” after they struggled to “come to terms with the loss”.

“I was able to sit Jed down and explain: ‘Daddy’s brain was sick, that’s why he did what he did’. The diagnosis has helped them understand what happened,” she told The Australian.

“For my daughter Emerson it has also given her a sense of relief because of what’s being said out there [that Green had depression]. She now understands that he wasn’t in that space and there’s nothing we could have done, ­because he was sick. We just didn’t know it.

“This diagnosis has helped us understand and rationalise what has happened. It has given myself, the kids, some peace.”