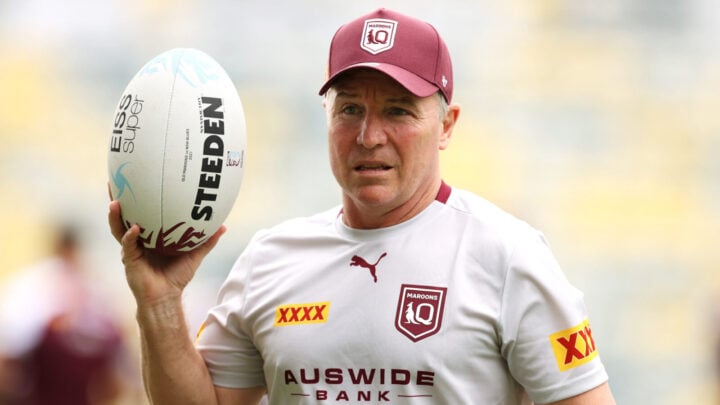 The Director of the Australian Sports Brain Bank said he was "blown away" by the "incredibly generous donation". Source: Getty Images.

Following the tragic death of rugby league star and premiership-winning coach Paul Green his “devastated” family have made the generous decision to donate his brain to science in an effort to better understand the impact of concussion on sportspeople.

In a statement on the Australian Sports Brain Bank website, Green’s family encouraged fans of the late rugby icon to support the organisation’s “pioneering work” by helping them reach their goal of raising $150,000 to help fund research.

“In memory of our beloved Paul, we ask that you support the pioneering work of the Australian Sports Brain Bank,” the statement read.

“Paul was known for always looking out for others. We are proud that part of his legacy will be looking out for the brain health of all others involved in the game that he loved.

In a statement provided to Nine, Michael Buckland the Director of the Australian Sports Brain Bank said he was “blown away” by the “incredibly generous donation”.

“This is an incredibly generous donation and will be an invaluable part of our research into the long-term effects of repetitive head impacts in sport and elsewhere,” he said.

“We at the Australian Sports Brain Bank are blown away by the fact that in their time of grief, Amanda and the rest of the family thought of how they could help others.”

The selfless act comes as a devastated rugby league community continues to mourn the sudden death of Green whose stellar playing career included taking the field an incredible 162 times with a number of clubs which included the Cronulla-Sutherland Sharks, North Queensland Cowboys, Sydney Roosters, Parramatta Eels, and the Brisbane Broncos.

Green’s family recently revealed that the sporting icon will be farewelled in a public funeral to celebrate his life and incredible sporting achievements. The public farewell is expected to be held at Kougari Oval, the home ground of the Wynnum-Manly Seagulls where Green played as a junior and where he would later return as a coach to lead the Seagulls to Queensland Cup premierships in 2011 and 2012.

Our deepest condolences to the family, friends and colleagues of Paul Green following his sudden passing