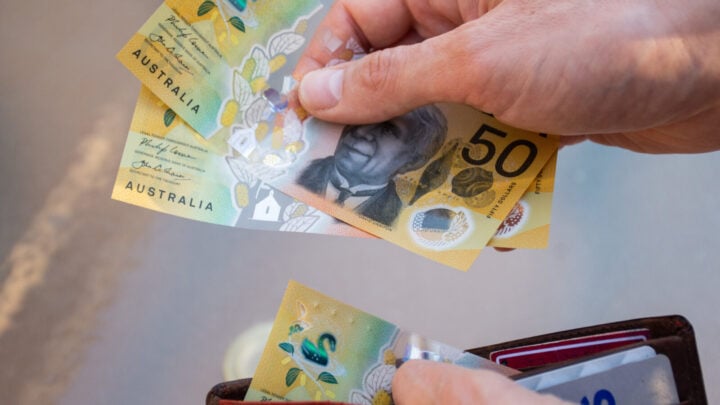 Millions of Aussies will have seen their phone bills soar as much as $480 over the past year. Source: Getty

If you’ve been feeling the pinch from your mobile phones bills, you aren’t alone, with a new report revealing three of Australia’s biggest telco companies have increased the cost of mobile plans by hundreds of dollars a year. The report by the Australian Competition and Consumer Commission (ACCC) has shown that millions of consumers will have seen a drastic increase in the cost of Telstra, Optus and Vodafone bills since July 2020. The price hikes follow the $15 billion merger of TPG and Vodafone, and the resulting ease in competition in the Australian mobile market.

The findings show that Telstra, Optus and Vodafone have all increased the price of several post-paid plans, and effectively raised the price of a range of pre-paid plans by reducing their expiry periods, forcing customers to recharge more often.

With such a stronghold, this new data suggests the big three care little about losing customers to competitors, says Rod Sims, chair of the ACCC. “Our analysis shows that consumers will now be left paying significantly more for a range of mobile phone plans at Telstra, Optus and Vodafone,” he said. “The behaviour of the three big telcos would suggest they are not concerned about losing customers to rivals.

“The ACCC opposed the merger of TPG and Vodafone because we were concerned it would lead to higher mobile prices, and result in three similar providers with little incentive to compete strongly.

“Despite evidence showing the three mobile network owners reacted strongly to the potential competitive threat of a new TPG network, the Court considered that the merger would be pro-competitive, allowing Vodafone to compete more effectively against Telstra and Optus.

“When markets end up with a smaller group of large lookalike players with stable positions, competition is muted and consumers pay more.”

Telstra has increased its post-paid mobile plan prices by $5 to $15 per month, meaning consumers could be looking at paying up to $180 more across the space of the year. Pre-paid phone owners on Telstra can also expect to be paying more, as the company moved to reduce the expiry period of mobile credit from 35 and 42 days down to 28 days, which — according to the ACCC — equates to a price increase of between 25 per cent and 50 per cent over a year. (For more on Telstra, read this.)

According to the ACCC, the price increases are due to “a forced migration” as customers were moved on to the newer, more expensive plans over the three-month period to October 2020″.

Optus has also increased its post-paid plans by $6 a month, however, the ACCC said the new plans are similar in structure to the ones they replace. There has been no increase in pre-paid plans.

Those looking to take out a Vodafone plan could expect to pay up to $480 more a year than in 2020. The company has increased the cost of post-paid plans from $5 to $40 a month, however, the ACCC says the “increases are currently accompanied by heavy discounting and temporary bonus inclusions”. Vodafone’s pre-paid plans have been reduced to a 28-day expiry (previously 35 days) for the same monthly cost, which equates to a 25 per cent price increase in a year.

Following the report, the ACCC has encouraged Telstra, Optus and Vodafone mobile customers to compare prices and features offered by smaller providers, which may offer cheaper alternatives. The consumer watchdog predicted current consumers of the three big telcos could save between $5 and $25 per month, or possibly more, by moving to a different provider with comparable inclusions.

The watchdog encouraged consumers to double-check how much data they use a month, with research suggesting the average mobile phone user in Australia consumes less than 15GB of data per month, meaning you might be paying for something you’re not even using.

“We suspect many customers who have recently had their mobile provider justify a price increase with higher data usage, would prefer the previously available lower monthly fee in exchange for a lower data allowance,” Sims said. “We want all mobile customers to know that switching to a new provider is a very simple process, and the new provider will move your existing number over for you. Before changing over, we encourage consumers to compare different providers’ geographic coverage, and consider their individual needs, as not all providers offer the same coverage.”

Have you noticed these price increases?